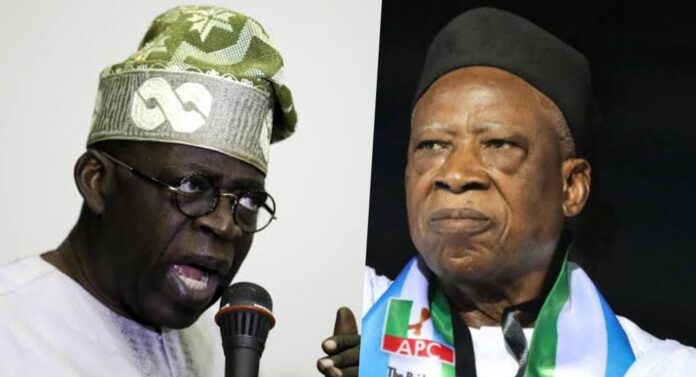 Tinubu made the clarification before his scheduled meeting with the National Working Committee of the APC at the party’s headquarters in Abuja.

According to him, it is rarity to see big masquerades dance in a cage instead of the market square.

The roundtable, which was earlier slated for 10.00 am, did not commence until five hours later.

Addressing newsmen at the secretariat, Tinubu who admitted reading his alleged cold War in newspapers, claimed that it was a rumoured manufactured to suit a particular purpose.

He said, “To the rumour manufacturers, I read in some papers about a disagreement between myself and the chairman and that was a very big lie. They didn’t know that we have come a long way. The big masquerade dance not in the cage but in the market square.

“And that is what Adamu use to be, full of wisdom, we were governors together, before God put us together on this project again. He is going to deliver as the Chairman of the party for me to become the president of Nigeria. And I am very confident of that.

“They can say whatever they want to say, throw all the jabs that they want, we are a party strongly determined to fulfil our dreams of turning Nigeria into a very progressive, highly developed, prosperous country.”

Continuing, the former governor of Lagos State applauded the NWC members, adding that he visited them to discuss the modalities of the political campaign, which is just few days away.

“What we came here today to do is to discuss the campaign which is few days away. When INEC will lift the ban, how do we work out the details, work together, implement all we have been saying,  who are the members of the campaign council, who will not be members, and I beg you not to be angry if you are left out because we are going to give you another responsibility? Not every member here can be a member of the presidential campaign council.