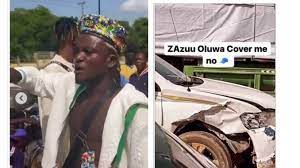 Few hours ago, Nigeria’s street pop sensation Habeeb Okikiola, better known as Portable escaped dead as his white SUV was involved in an accident, the eccentric singer came out unscratched. Reports say the accident which occurred in the early hours of today 28 of May 2022. Left the singer shaking .

The Yoruba-born  rounded  entertainer shared on the Instastory of his official Instagram account, he was seen expressing his gratitude to God for escaping what he claimed to be a trap by the evil doers while he shows off the damaged vehicle. According to him, they may be plotting against him because he is now a super star.

Barely a year after Portable came to the limelight with his hit single, Zazuu Zeh, the Ogun-born superstar loves to be in the news for several reasons with controversy being one of his main stay . Just recently, he was called out by organizers of the Headies Award for a life-threatening post targeted at co-nominees. However, the award-winning singer has successfully carved a niche for himself as one of the most successful and sought-after entertainers who has also gained global recognition