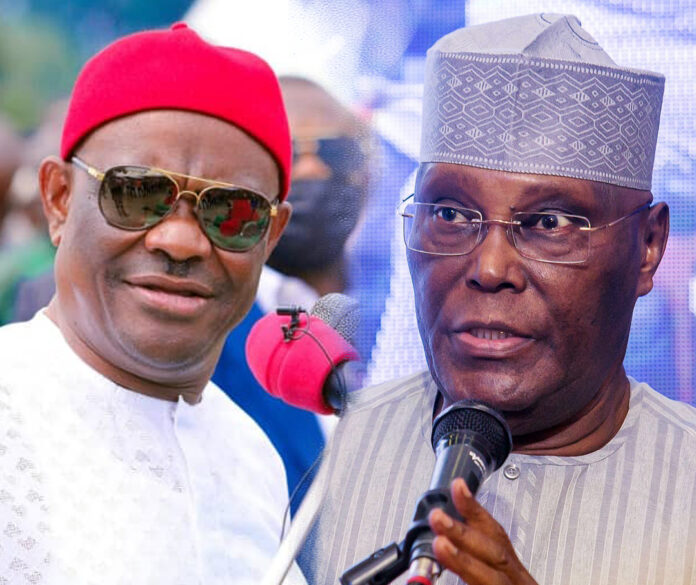 This is sequel to the refusal of Wike and his four aggrieved colleagues, namely Samuel Ortom (Benue), Ifeanyi   Ugwuanyi (Enugu), Seyi Makinde (Oyo) and Okezie Ikpeazu (Abia) to be appeased despite  entreaties.

Wike and his colleagues have insisted that the resignation of the PDP National Chairman, Dr. Iyorchia Ayu, remains the irreducible minimum demand for peace to reign.

In the open, the Atiku team remains optimistic that peace is in sight. However, the general mood within is to forge ahead with or without “those who have obviously since made up their minds on what they want to do”, an insider told Sunday Vanguard in Abuja.

Former Chairman of the party’s Board of Trustees, Sen. Walid Jibrin, who is a member of the party’s team of optimists, described the feud as “a family affair” which will soon be resolved.

He told party supporters that those fueling the dispute will soon be put to shame because party leaders who have waded into the dispute were making a head way.

Wike, on his part, has used every opportunity to tell those who care to listen that unless Ayu steps aside, there can be no resolution of the dispute.

He has since started campaign for PDP candidates seeking elections for governorship, state and National Assembly positions in his Rivers State to the exclusion of the presidential.

Only last Tuesday, while inaugurating the Rukpokwu-Igwuruta Link Road in Obio-Akpor LGA of Rivers, Wike enjoined   his audience to vote for the PDP in all the elective positions in the 2023 elections but that for the position of President, he would make his preferred choice public in due course.

And the crowd responded — “yes”.

“Then the other one (President), I will come and tell you where you will vote. All I will tell you is don’t worry, calm down.

Those that I mentioned, make sure you vote them.

“Very soon, we will meet at our houses and take a decision on where we are going.

“At the state level this party is doing very well and you must continue with us.”

The governor boasted that there was no political party that can win the presidential election in Rivers State without his support.

There have been insinuations that Wike was working with the candidate of the All Progressives Congress (APC), Asiwaju Bola Ahmed Tinubu, and that of the Labour Party, Mr Peter Obi, with a view to delievering his state’s votes to one of them in the 2023 election.

Atiku’s team has since resolved to go ahead with its campaign while avoiding any open verbal exchanges with the Rivers governor and his supporters.

Wike’s last week outburst is expectedly generating tension in the PDP as no one is sure of the decision the Rivers governor will take as any negative decision against Atiku will ultimately affect the chances of the presidential candidate in Rivers and possibly in the states of the four governors of the PDP who are his allies.

But a top member of the Atiku team tried to play down the tension at the weekend when he told Sunday Vanguard, “We have since moved on.

The truth of the matter is that no matter what you do at this point, the other side has made up its mind on what it wants to do.

“We have a campaign and an election to contest and the best strategy is to keep our eyes on the ball and try as much as possible to avoid distractions.

“Our candidate has bent over backwards to accommodate as many aggrieved party members as possible.

He has said it time and again that he has no power under our Constitution to compel Ayu to resign.

“Assuming but not conceding that he possesses such power, what message will he be sending to his supporters within and outside the party if he sacrifices Ayu?

The truth is that the train has since left the station; we need each other but not at the cost of the interest of our party and the generality of Nigerians.”

Party leaders have tried unsuccessfully to broker peace as both parties in the dispute have stuck to their guns.

Wike and his supporters in the party leadership have made good their threat to steer clear of the party’s presidential campaign as long as Ayu remains.

In the last couple of weeks, the governor has been inviting presidential candidates of other political parties to inaugurate projects in Rivers State, in addition to promises of “logistics support” for their campaigns.

The PDP leadership, on its part, appears to be in a quandary over whether or not to wield the big stick against Wike, his four other colleagues and other party leaders/members for alleged anti-party activities.

Most party watchers spoken to expressed the view that wielding the “big stick” at this point would create bigger challenges for the PDD than the current fire it is trying to put out.