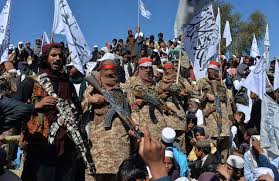 On Monday, Taliban fighters chanted slogans of victory next to the United States Embassy in Kabul as they marked the first anniversary of their return to power in Afghanistan following a tumultuous year that saw the rights of women crushed and a humanitarian crisis worsen.

Exactly a year ago, the hardline Islamists captured Kabul after a nationwide lightning offensive against government forces just as US-led troops were ending two decades of intervention in a conflict that cost tens of thousands of lives.

“On this day… the Islamic Emirate brought the world’s superpower and its allies to their knees and Afghans gained their independence,” added Baradar, who in 2020, signed a deal with Washington offering security guarantees in return for the withdrawal of foreign forces.

The last American troops left on August 31, ending a chaotic evacuation of tens of thousands of Afghans who had rushed to Kabul’s airport in the hope of boarding a flight out of the country.

Images of crowds storming the airport, climbing atop aircraft – and some clinging to a departing US military cargo plane as it rolled down the runway – aired on news bulletins around the world.

“We fulfilled the obligation of jihad and liberated our country,” said Niamatullah Hekmat, a fighter, who entered the capital on August 15 last year just hours after then-president Ashraf Ghani fled the country.

“The time when we entered Kabul, and when the Americans left, those were moments of joy.”

Many Taliban fighters gathered in Kabul’s central Massoud Square, where they displayed the regime’s white banners and performed a traditional victory dance, some holding weapons and others taking pictures on their mobile phones.

“We all are happy that we are celebrating our independence in front of the US embassy,” fighter Aminullah Omar told newsmen .Related News

However, for many ordinary Afghans – particularly women – the return of the Taliban has only increased hardships, with aid agencies saying that half the country’s 38 million people face extreme poverty.

Initially, the Taliban promised a softer version of the harsh Islamist rule that characterised their first stint in power from 1996 to 2001.

But many restrictions have been imposed on women to comply with the movement’s austere vision of Islam.

Tens of thousands of girls have been shut out of secondary schools, while women have been barred from returning to many government jobs.

And in May, they were ordered to fully cover up in public, including their faces, ideally with a burqa.

“Since the day they have come, life has lost its meaning,” said Ogai Amail, a resident of Kabul.

“Everything has been snatched from us, they have even entered our personal space,” she added.

Top Taliban officials in Kabul gathered at the auditorium of the state television channel to mark the anniversary, while in the movement’s power base in Kandahar, a small group of women dressed in burqas and supportive of the new regime marched in the streets.