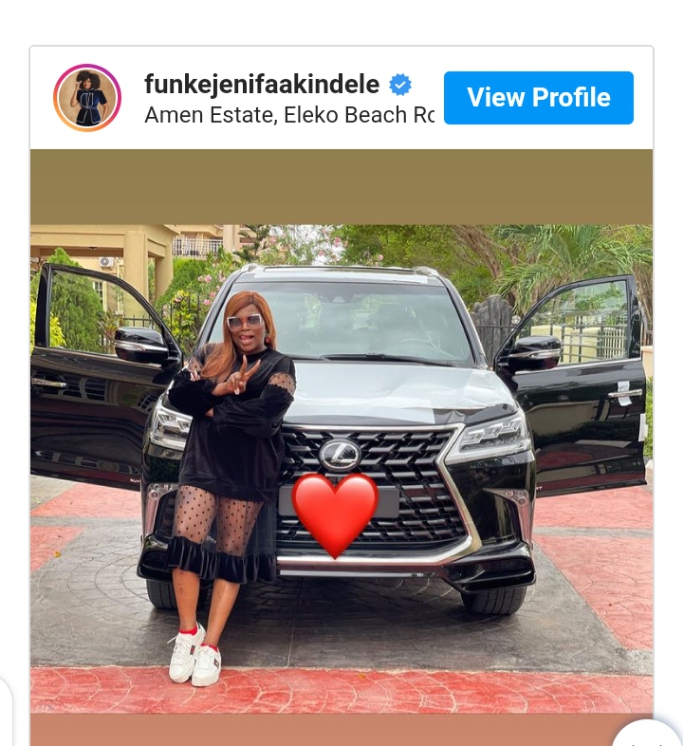 Thespian actress Olufunke Ayotunde Akindele-Bello, popularly known as (Jenifa) now has a new baby which she referred to as a gift, the popular Aiyetoro girl is now join the exclusive list of SUV 2020 owner with the acquisition of Lexus SuperSports LX 570 2020 which is said to worth a whooping N135M.

Funke who emerged as the Best Actress in a Leading Role'' at the 2009 Africa Movie Academy Award, has yet to look back in her comic role since her debut in the popular United Nation Population Fund (UNFPA) sponsored sitcom,I need to know” which was on every viewers log in from 1998 to 2002.

The law graduate from the prestigious University of Lagos, Funke has starred in many A-list film and widely acknowledged in her TV series comic play titled “Jenifa’s diary”, she also have big endorsements from FMCG brands.

The screen diva, Funke Akindele-Bello however took the good news of her latest acquisition to her Instagram page where she shared the photo of her new ride, but she quickly added that it was a gift.

Her husband, and rapper, JJC Skillz also celebrated his adorable wife on his Instagram page where he shared a video of the SUV.

“Congratulations @funkejenifaakindele Hard work pays my darling. Congratulations on your new ride. Thank you to all the jenifan, and every single supporter. 🙌🏾 God bless and uplift you,” he captioned the video.

Funke also replied on the page