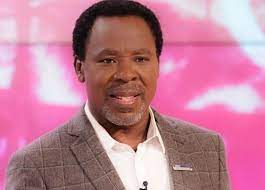 The Synagogue Church of All Nations (SCOAN) has denied that fire gutted the tomb covering of the late founder of the church, Prophet TB Joshua.

A statement by a representative of the Legal Department, SCOAN, James Akhigbe, on Wednesday, refuted the claim, saying the tomb shelter was not affected by the fire.

The statement read in part, “Contrary to the report by some media houses, we wish to clarify that the minor fire incident, which was recorded on Wednesday, April 27, 2022, was at the church’s prayer resort at Agodo-Egbe, a different church site which is over two kilometres away from the Ikotun-Egbe site of the main church premises where the tomb of late Prophet T.B. Joshua is sited.

“Curiously, the over two kilometres distance between the Agodo prayer resort where the minor fire incident was recorded at one of the general purpose stores, and the Ikotun-Egbe headquarter premises of the church where the tomb is located, is too far apart to give room for any form of confusion or mix-up.”