RRS To The Rescue As Ijanikin, Otto-Awori Youths Engage In Violent Clash 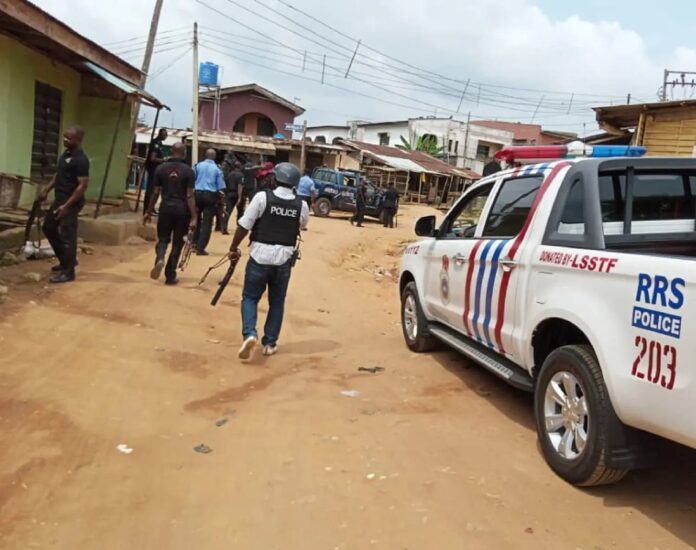 It took the intervention of the personnel of the Rapid Response Squad (RRS) to restore normalcy in Ijanikin and Otto-Awori communities on Thursday, 25 August, 2022 as youths from both towns engage themselves in a violent clash that allegedly led to the death of one person with several people injured.

This medium learnt that the youths of the towns have always been at loggerheads over minor issues but the one on Thursday was more than what the elders in the two communities bargained for.

According to eye-witness account, for almost six hours, youths from both towns engage themselves in violent clash and barricaded the ever busy Okokomaiko-Ijanikin-Otto-Agbara-Badagry Expressway for several hours.

They blocked the two sides of the from Vespa Bus stop down to the Council bus stop onward to Otto-Awori town preventing vehicles from moving to and from Badagry. They also lit bonfires on the road.

For hours, the youths attacked each other with dangerous weapons.

There has been tension among the youths of the two communities which prompted the Chairman of the Lagos State chapter of the All Progressives Congress (APC), an indigene of Ese Offin, a riverine community in Otto-Awori Local Council Development Area, Pastor Cornellius Ojelabi to urge the two traditional rulers of the two warring communities to warn the youths to desist from any act of violence or action that can cause breach of peace.

It was during the first anniversary in office of the Otto-Awori LCDA Chairman, Prince Musbau Ashafa that Ojelabi spoke on Wednesday, 24 August, 2022.

It is therefore a sad irony that the youths went to war a day after the warning by the APC Chairman.

The RRS Commander, CSP Saheed Yinka Egbeyemi responded to the distress call by sending his men to the scene of the incident.

They restored normalcy and cleared the bonfires off the road and full normalcy has returned as at the time of writing this report.

The Chairman of the Council, Prince Musbau Ashafa confirmed that normalcy has been restored fully.