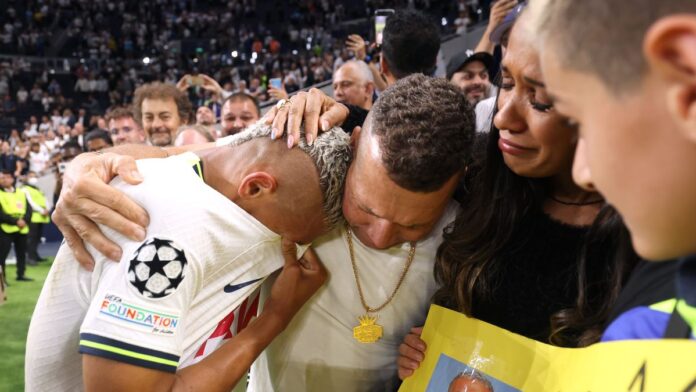 Richarlison marked his Champions League debut with two goals as Tottenham Hotspur got up and running with a comfortable 2-0 win against 10-man Marseille.

The £60million signing, Spurs’ new club record, scored twice inside five second-half minutes to down the French giants and get Antonio Conte’s team off to an ideal start. Richarlison headed home Ivan Perisic’s inch-perfect cross to give his side the lead in the 76th minute before doubling Tottenham’s advantage with another header, this time from a superb Pierre-Emile Hojberg delivery.

In a heart-warming moment, Richarlison ran over to his father for an emotional embrace after scoring the opening goal on an enthralling night in the competition. The teary-eyed 25-year-old hadn’t played in the Champions League while at previous English clubs Everton and Watford, and he cited it as one of the main reasons why he chose to join Tottenham this summer.

“It’s a dream isn’t it? I was commenting with my friends that the TV gave us goosebumps just listening to the theme song. So now I can be inside the stadium, listening to that music,” Richarlison said after putting pen to paper on a five-year deal with Spurs. “I always said it was my dream to play in the Champions League, and now this dream will come true.

The Brazilian’s dreams were realised when he evaded his marker, on-loan Manchester United defender Eric Bailey, for both goals. Tottenham’s chances of victory were significantly boosted by the dismissal of ex- Newcastle centre-back Chancel Mbemba, whose ill-timed challenge on Heung-min Son gave Slovenian referee Slavko Vincic no choice but to send him off early in the second half.

Post-match, Richarlison tweeted : “It was years of struggle, and you were always by my side. I just need to thank you for not giving up on me and my dream. Today, having you here, made the moment even more exciting for me. We continue together for even bigger dreams to come! Thanks Dad!”