Refusal to release Kanu, part of plot against Ndigbo – Lawyer 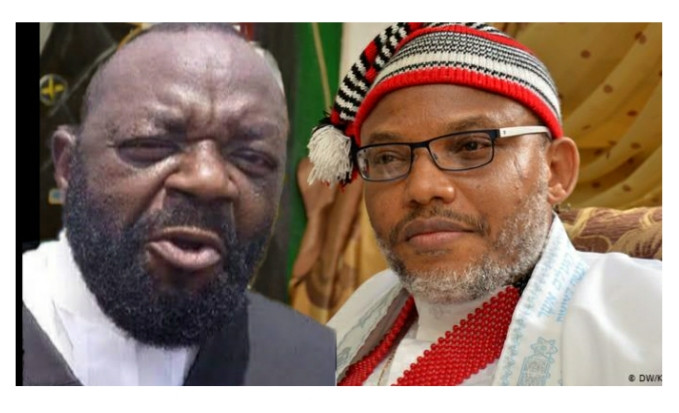 Aloy Ejimakor, a special counsel for the leader of the Indigenous People of Biafra, Nnamdi Kanu, has accused the Federal Government of having “a sinister plot against Ndigbo” for not releasing Kanu from detention.

Ejimakor, who said this in a tweet posted to his Twitter page on Monday, alleged that there was a hidden agenda to put “Ndigbo between a rock and a hard place” as Nigeria matches to the poll in 2023.

He tweeted, “It’s becoming self-evident that the refusal to release Mazi Nnamdi Kanu is part of a sinister plot against Ndigbo. The hidden agenda is to put Ndigbo between a rock & a hard place as Nigeria farcically careens into the 2023 elections. The good news is that it will boomerang. Yes!”

The Court of Appeal sitting in Abuja had, on Thursday, October13, 2022, discharged Kanu, declaring as illegal and unlawful, his abduction from Kenya to Nigeria and quashed the entire terrorism charges brought against him by the Federal Government.

The appellate court held that the Federal Government breached all local and international laws in the forceful rendition of Kanu to Nigeria thereby making the terrorism charges against him incompetent and unlawful.

In a judgment by Justice Oludotun Adebola, the court voided and set aside the charges by the Federal Government against Kanu and proceeded to discharge him from the alleged offences.

Meanwhile, the Federal Government, through the Attorney General of the Federation and Minister of Justice, Abubakar Malami, in a swift reaction to the discharge of Kanu had said Kanu was only discharged but not acquitted.

In a statement signed and released by Malami’s Special Assistant on Media and Public Relations, Umar Gwandu, on the night the appellate court freed Kanu, the AGF said the court’s decision was on a single issue that bordered on rendition.

The statement added that there were other issues predating Kanu’s rendition “on the basis of which Kanu jumped bail” which remained “valid issues for judicial determination.”

It further stated that the Federal Government would continue to pursue determination of pre-rendition issues while considering all available options on the judgement on rendition.

The statement had read, “The Office of the Attorney General of the Federation and Minister of Justice has received the news of the decision of the Court of Appeal concerning the trial of Nnamdi Kanu. For the avoidance of doubt and by the verdict of the Court, Kanu was only discharged and not acquitted.

“Consequently, the appropriate legal options before the authorities will be exploited and communicated accordingly to the public.

“The decision handed down by the court of appeal was on a single issue that borders on rendition.

“Let it be made clear to the general public that other issues that predates rendition on the basis of which Kanu jumped bail remain valid issues for judicial determination.

“The Federal Government will consider all available options open to us on the judgment on rendition while pursuing determination of pre-rendition issues.”

Sequel to its statement, the Federal Government went on to appeal the Court of Appeal’s judgement freeing Kanu and discharging him of all offences, seeking a stay of execution.

The appellate court, after hearing the FG’s fresh suit, granted a stay of execution of the discharging of Kanu, a ruling which the IPOB legal team had since appealed before the Supreme Court.

As of the time of filing this report, the leader of the proscribed IPOB had yet to been released from detention by the Federal Government.