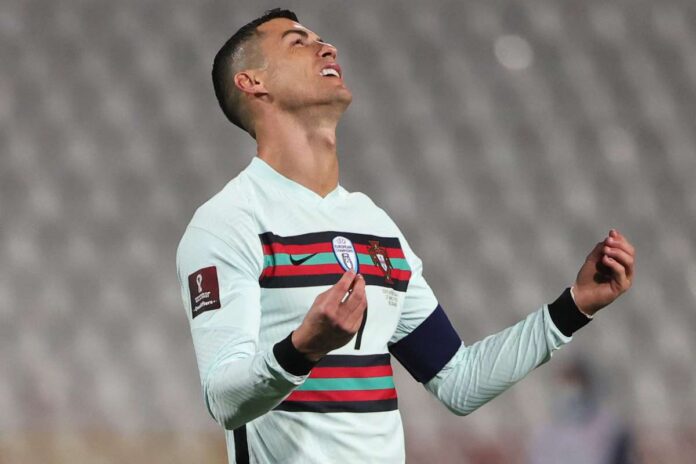 Referee Danny Makkelie said he apologised to Portugal coach Fernando Santos after not giving Cristiano Ronaldo the winner against Serbia.

The Dutch referee was criticised after a Portugal winner wasn’t given in the World Cup Qualifiers, as Ronaldo managed to beat the goalkeeper for a last-gasp 3-2 winner, and the ball seemed to cross the line completely before the desperate clearance.

The referee and linesman didn’t award the goal and Ronaldo was furious after the final whistle, throwing his captain’s armband to the floor in rage.

“According to the FIFA policy, all I can say is that I apologised to the coach of the national team, Fernando Santos, and the Portuguese team for what happened,” Makkelie told A Bola.

“As a refereeing team, we always work hard to make good decisions. When we get news like this, it doesn’t satisfy us at all.”

The referee at the centre of Portugal’s 2022 World Cup qualifying row has revealed he apologised for an error of judgement in refusing to award Cristiano Ronaldo’s late strike against Serbia.

With the match finely poised at 2-2 it appeared Ronaldo had secured three vital points when he rounded goalkeeper Marko Dmitrovic to score.

Defender Stefan Mitrovic raced to clear on the goal line and hacked the ball away, leaving the officials to declare it had not gone over the line and to continue playing.

The decision caused Ronaldo to storm off, furious at the officiating, and he could yet face retrospective sanctions from FIFA.

Article 11 in FIFA’s Disciplinary Code is titled: ‘Offensive conduct or violation of the principles of fair play’.

The article says: ‘Associations and clubs, as well as their players, officials or any other member or person performing a function on their behalf, must comply with the Laws of the Game, the FIFA Statutes and the regulations, directives, guidelines, circulars and the decisions of FIFA; likewise, they must comply with the principles of fair play, loyalty and integrity.’

It has yet to be confirmed if Ronaldo, who threw his captain’s armband to the ground before vacating the pitch prior to the final whistle, breached Article 11.

Referee Danny Makkelie was hounded by Portugal’s players and management staff but he did not change his view that the ball had in fact not crossed the line.

‘All I can say is that I apologised to the national coach, Mr. Fernando Santos, and to the Portuguese team for what happened,’ Makkelie told Portuguese newspaper A Bola.

‘As a refereeing team, we always work hard to make good decisions. When we are in the news this way, it does not make us happy at all.’

Portugal boss Fernando Santos claimed that Makkelie told him he was ’embarrassed’ at the final whistle.

Makkelie and his colleagues were vilified by the Portuguese press over the weekend, with front pages talking up a ‘theft’ and also singing the praises of ‘VAR, sweet VAR’.

In the eyes of Ronaldo, the decision not to award the goal left an ‘entire nation harmed’.

‘Being captain of the Portugal team is one of the greatest pride and privileges of my life,’ Ronaldo said on Instagram.

‘I always give and will give everything for my country, that will never change.

‘But there are difficult times to deal with, especially when we feel that an entire nation is being harmed. Lift your head and face the next challenge now! Come on, Portugal!’

While many could understand the grievances of Ronaldo, former Portugal international Fernando Meira took a swipe at the talisman for ‘setting a bad example’ to others.

Much was made of Ronaldo’s decision to rip off his captain’s armband before throwing it to the ground with opinion divided on whether it was disrespectful given the circumstances.

Meira told Record : ‘It’s clearly a goal, but Ronaldo can’t throw the armband on the ground like that.

‘Cristiano’s reaction is natural, but it’s not acceptable from the national team captain. You can’t throw the armband on the ground and head into the dressing room while the game is still going on.

‘It’s not acceptable behaviour for a player of his stature. The example he set last night wasn’t good enough.’

It was an explosive ending to a thrilling World Cup qualifier as Serbia striker Aleksandar Mitrovic became his country’s all-time top scorer on 39 goals from 63 international appearances.

The Fulham forward netted his side’s first goal in a 2-2 home draw as the Serbians fought back from two goals down to earn a share of the spoils.

Mitrovic pulled one back in the 46th minute and Filip Kostic levelled after a brace from Liverpool forward Diogo Jota had given Portugal a 2-0 lead in the first half.

Liverpool forward Jota fired the European champions ahead with an 11th-minute header from a superb Bernardo Silva assist and added another in the 36th as he glanced a Cedric Soares cross from the right.