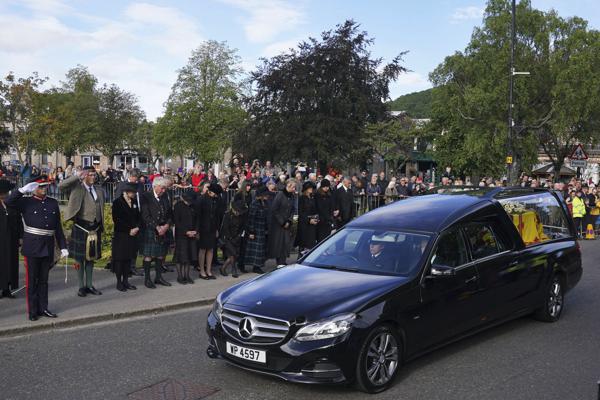 LONDON (AP) — Queen Elizabeth II’s flag-draped coffin is passing through the rugged Scottish countryside Sunday on a final journey from her beloved summer estate Balmoral Castle to London, with mourners quietly lining roads and some tossing flowers to honor the monarch who died after 70 years on the throne.

The hearse drove past piles of bouquets and other tributes as it led a seven-car cortege from Balmoral, where the queen died on Thursday, for a six-hour trip through Scottish towns to Holyrood house palace in Edinburgh. The late queen’s coffin was draped in the Royal Standard for Scotland and topped with a wreath made of flowers from the estate, including sweet peas, one of the queen’s favorites.

“A sad and poignant moment as Her Majesty, The Queen leaves her beloved Balmoral for the final time,” the first minister of Scotland, Nicola Sturgeon tweeted. “Today, as she makes her journey to Edinburgh, Scotland will pay tribute to an extraordinary woman.”

Crowds lined parts of the route as the nation mourns its longest-reigning monarch, the only one most Britons have ever known. In the Scottish village of Ballater, where residents regard the royal family as neighbors, hundreds of people watched in silence and some threw flowers in front of the hearse as it passed.