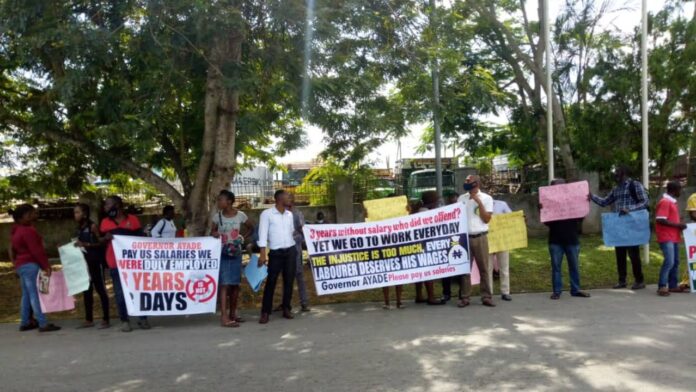 No fewer than 1,700 civil servants in Cross River on Tuesday took to the street to protest nonpayment of five years salaries.

The News Agency of Nigeria reports that the protesters, who converged at the State’s secretariat as early as 7:30am, blocked the entrance to the secretariat.

Displaying placards with various inscriptions, the protesters chanted solidarity songs and appealed to the government to pay their salaries.

Some of the inscriptions read: “where is the fold on the table you promised? Hunger is everywhere we are humans and not animals.”

“Gov. Ayade pay us our salaries. We were duly employed. Five years is not five days.”

Spokesman for the protesters, Raphael Antigha, said that since they were employed between 2017 and 2018, they had not received any salaries.

According to him, “We have made many emissaries to the government to get them to pay us and each time, it is the same promises.

“The government has made us to undergo two screening and verification to resolve the issue and yet, the issue remains the same.

“We were duly employed and have all been issued establishment number and even appointment letters and properly documented.

“We are just about 1,700 in number and the highest salary amongst us is N47, 000. Each time the government complains of no money and yet, he gives out hundreds of political appointments each week, where is he getting the money to pay them?”

Responding on behalf of the government, the Head of Service, Ogbang Akwaji, said  that government was not owning any worker salary.

“Cross River government is one state that has placed great premium on the welfare of its workforce, in spite the challenging revenue inflows. At the moment, July salaries have been paid to workers by the state government. There are no workers in the state who are being owed five years salaries,” he said.