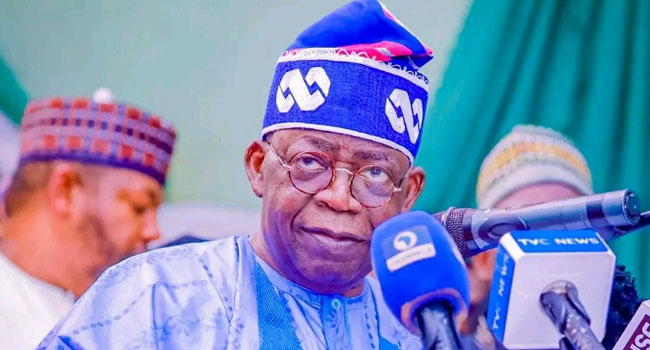 Asiwaju Bola Ahmed Tinubu, the All Progressive Congress presidential candidate on Saturday, declared that he is not sick but hale and hearty, saying it often baffles him when the opposition kept insisting that he is sick.

Tinubu said this at a dinner organised in his honour by the Kano Business Community.

He said, “I’m neither running for a 100-yard or 500-yard race nor am I competing in WWE wrestling. I’m running for the presidency which is a knowledge-driven job

“I am very healthy.”

“Do I look sick?” Tinubu asked the audience.

The APC presidential candidate whose mission in Kano was to inaugurate the APC governorship and presidential campaign offices in the commercial city announced the donation of N500,000,000 to flood victims.

The Kano business community used the occasion to present a blueprint for their demands if he eventually clinches the presidential seat.

While assuring the business community that the document would not be tampered with, Tinubu, said when he wins the 2023 presidential election, he would implement the document.

In his remark, Kano State Governor, Dr Abdullahi Umar Ganduje, shortly after outlining his achievements in the state, within the last seven years plus, declared that the APC is the winning ticket all through, judging by the achievements of the President Muhmmadu Buhari’s administration in the country at large and Kano in particular.

“Is it the Inland Dry port that has been ongoing for over 25 years, which is almost at 100 per cent completion stage or is it the modern railway from Lagos to Kano to Katsina and Maradi, in the Niger Republic,” Ganduje asked rhetorically?

Humorously, Ganduje told the audience that Asiwaju Bola Tinubu is a son of the soil in Kano and his name is Ashiru Bala Tanimu.