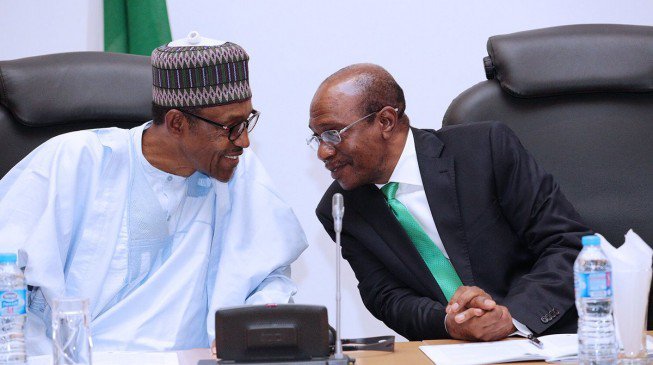 President Muhammadu Buhari stated yesterday that the CBN has his backing for the project, despite controversy surrounding the Finance Minister’s, Mrs. Zainab Ahmed’s, stance on the CBN’s decision to start redesigning Naira notes.

Ahmed, at the weekend, declared that the CBN did not carry her Ministry along in the new Naira note plan, warning that the new notes could have dire consequences on the value of the Naira.

But Buhari in a statement by his Senior Special Assistant on Media and Publicity, Mallam Garba Shehu, said he is convinced the nation will gain a lot by doing so.

Speaking in a Hausa radio interview with Halilu Ahmed Getso and Kamaluddeen Sani Shawai, Buhari said reasons given by the CBN convinced him that the economy stands to benefit from a reduction in inflation, currency counterfeiting and the excess cash in circulation.

He said he did not consider the period of three months for the change to the new notes as being short.

According to him, “people with illicit money buried under the soil will have a challenge with this, but, workers, businesses with legitimate incomes will face no difficulties at all.”

Meanwhile, economists and financial experts have harped on the need for harmony between the fiscal and monetary policy authorities while maintaining the independence of the CBN.

David Adonri, Vice-Chairman, Highcap Securities, said that, while it is important for both the CBN and the Finance Ministry to synergise on policy-making in order to achieve a better outcome, the independence of the CBN as obtained in other economies does not require the permission of even the president to undertake a project such as the redesigning of the Naira.

In his words: “The economy is managed by the government through macro-economic policies (fiscal and monetary policies); while the Federal Ministry of Finance (FMoF)  is the fiscal authority, CBN is the monetary authority. They are expected to work harmoniously in policy formulation and implementation. Any discord between these authorities is detrimental to economic management.

“Before any policy is formulated by any of them, there ought to be in-depth consultation between them and thorough analyses to know the sensitivity on either side of the economy.

“Although each authority has its areas of exclusivity, which it may exercise without recourse, carrying each other along will facilitate superior policy outcomes.

“In this particular instance, the reasons for changing of currency by CBN are justifiable but there is no reason for not carrying the FMoF along for them to be prepared for the change. Where the monetary authority is independent, which we clamour for, the Central Bank does not even require permission from the President to undertake any monetary action.

“Independence of a central bank is essential so that monetary policy will not be influenced by political expediency.”

The CBN, reacting to the position of the Finance Minister at the weekend, said it was surprised by the minister’s outburst and that due process was followed in arriving at the Naira redesign project, including obtaining the approval of President Muhammadu Buhari.

Also, the apex bank doused concerns about the cost of printing the new notes, saying they will come at no outrageous cost, printed in the country and within the budget of the apex bank.

According to a statement from the CBN’s spokesman, Mr Osita Nwanisobi, the apex bank stressed that the CBN remains a very thorough institution that follows due process in its policy actions.

According to Nwanisobi, the management of the CBN,  in line with provisions of  Section 2(b), Section 18(a), and Section 19(a)(b)  of the CBN Act 2007,  had duly sought  and obtained the approval of the President, Major General Muhammadu Buhari  (retd.) in writing to redesign, produce, release and circulate new series of N200, N500, and N1,000  banknotes.

However, urging Nigerians to support the currency redesign project, he said it is in the overall interest of Nigerians, and that some persons were hoarding significant sums of banknotes outside the vaults of commercial banks. This trend, he said, should not be encouraged by anyone who means well for the country.

Why Naira redesign is necessary — Moghalu

Commenting on the issue, a former Deputy Governor of the CBN, Kingsley Moghalu, said that the decision of the CBN to redesign the naira notes is a ‘necessary step’ for the good of the economy.

Moghalu averred his support for the decision in a series of tweets on his Twitter account on Friday.

He explained that the CBN is trying to gain control over the money supply in the economy.

“I fully support the Central Bank’s redesign of the Naira,” he said. “If 80% of banknotes in circulation are outside the banks, that’s troubling. The CBN obviously wants to force all those notes back into the banking system. Those with the notes must surrender to get new ones or else it becomes illegal tender after January 31 2023.

“This is also a way to withdraw currency from circulation, an unorthodox way of tightening the money supply since the country is battling high inflation.

“The flip side is that people who are holding huge amounts of cash outside the banking system for nefarious reasons will go the parallel forex market to buy hard currency, putting further downward pressure on the value of the Naira as too much Naira will be chasing too few dollars.

“I doubt it will solve inflation because there also are other major reasons for inflation such as the forex crisis, which this new move could exacerbate, as well as impact of the security crisis on food price inflation. But overall it is a necessary step.

“I just think the time window for its implementation is rather short. This will put a lot of operational pressure on commercial banks and the financial system in general. A 90-day window would have been better, but one can understand the need to avoid interfering with the elections.”