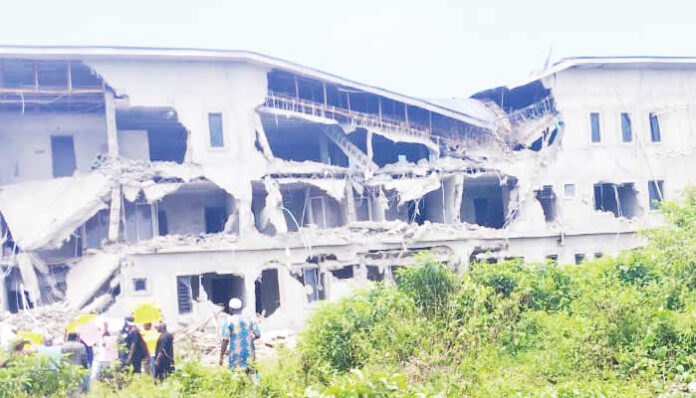 LANDLORDS and residents of Oluwa Palace community, in the Ibeju Lekki Local Government Area of Lagos State, have accused policemen of the Lagos State Environment and Special Offences Enforcement Unit and hoodlums of demolishing their houses and rendering them homeless.

According to information obtained from PUNCH, the hoodlums alongside the policemen stormed the community with bulldozers and destroyed over 50 structures, including houses, shops, among other property worth millions of naira.

The residents, while lamenting over the invasion, said they were not issued a notice for the demolition, adding that people who lost their property had been traumatised over the development.

A resident in the community, Olawale Yusuf, said his uncle’s property was part of the demolished property, adding that over N300m was expended on the property.

He said, “The property has 72 rooms and it belongs to my uncle. We have spent over N300m on it. We still have some property inside and could not bring them out during the demolition.

“We have not been able to bring the property out after the demolition. My uncle is not in good condition right now. We made our verification before building on this land.”

A property owner, Monday Ajanubor, said he was on a sick bed during the demolition exercise, adding that he was making plans to move into his new house when the demolition occurred.

He said, “Because my rent was about to expire, I was doing everything possible to ensure that I move into my new house on this land. I sold my cars to put the house in order.  Now they called me to say that the house I spent all my life savings on has been demolished.”

The head of the community, Nurudeen Oluwa, said the court had issued a warrant of possession to his family following a legal tussle between the family and the state government over the land.

He said, “We took the state government to court in 2009 when it attempted to take over the land. We knew then that there was no way to lawfully challenge the government other than going to court.

“In 2018, the court delivered judgment in our favour, and the judgment was registered at Alausa. Before we moved into the land, they gave us a certificate of warrant of possession. We have been living here since 2018, and members of the family also built their houses here, until the invasion on Thursday.”

The family’s lawyer, Ademola Olowoyeye, said the Permanent Secretary, Lagos State Lands Bureau, Bode Agoro, had frustrated the efforts of the family to enjoy the benefits of the court order.

He said, “Agoro directed the ministry of physical planning not to accept the registration of building permits, including the making of the fence. Several applications have been lying at the LASBCA office which they refused to treat.

“We wrote to the Attorney General of the state to ensure that the judgment was duly obeyed. He constituted a committee and made Bode Agoro the chairman of the committee. From the first day that we had those meetings, Agoro never betrayed his bias against the Oluwa family.

“When we asked him what he wanted, he said he would give the family 58 hectares out of 300 hectares and we felt that was not right. The last time we held a meeting was November last year, and because of his attitude, my client felt we should sue him and the Attorney General.”