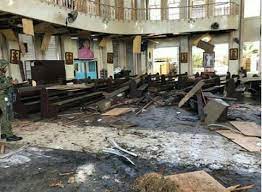 A Catholic cathedral in Indonesia has been engaged by suspected suicide bombers on Sunday that wounded more than a dozen of Christians worshippers as they celebrate a start of the Holy Week, an attack slammed by the country’s leader as an “act of terror”.

The powerful blast outside a church hosting around 100 people in Makassar city on Sulawesi island happened around 10:30 am local time (0330 GMT) and left at least 14 church officials and congregants injured by debris, police reveals.

Authorities have said it appeared that at least one of two attackers who drove into the church compound on a motorcycle was killed in the blast.

Forensic investigators were poring over body parts of the suspected attackers scattered at the scene to determine the fate of the second suspect and to identify those behind what authorities have called a “suspected suicide bombing”.

A church security guard tried to prevent the motorbike from entering when the blast occurred, they said.

One eyewitness described hearing two “very strong” explosions and then seeing plumes of smoke at the scene.

“There were several injured people on the street. I helped one woman…who was wounded and covered in blood,” Yosi, who like many Indonesians goes by one name, told AFP.

“Her grandchild was also injured. There were body parts everywhere.”

It was not clear if the victims’ wounds were life-threatening.