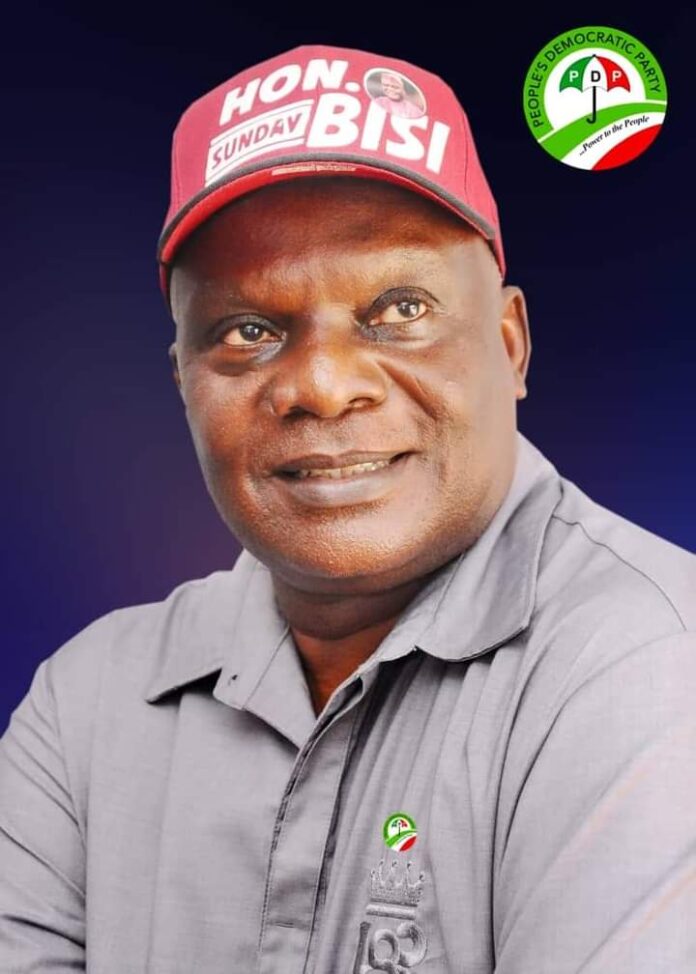 Chairman of the Peoples Democratic Party in Osun State, Sunday Bisi, in this interview with TIMOTHY AGBOR, speaks on why The Independent National Electoral Commission has fixed July 16, 2020 for the Governorship Election in Osun State. How confident and prepared is your party to dislodge the ruling APC?

We are very confident and very prepared for the election. You would recall that I just finished touring the 30 local governments and one Area Office in Osun State. That is to show you that we are well prepared. I just went for consultation with our people across the state but the consultation almost turned to a rally. People are expectant; they are ready for us to take over governance in this state. They have expressed their willingness to vote for us in the next election. We are winning with a landslide margin; not the gap we gave APC during the last governorship election. This time around, we are winning with a margin of more than 150,000 votes and it’s going to happen.

But the current administration is renovating medical facilities, constructing roads and flyover. Are these not enough achievements?
In the first instance, who built the hospitals? It was the PDP government that built the hospitals. The money used in renovating and painting the hospitals was secured from the World Health Organisation, running into billions of Naira. Not that they are building new hospitals, they are only painting them. The question is, who built the hospitals in the first place? The PDP did. The flyover is a misplaced priority. I was reading yesterday when someone was explaining the issue of funds regarding the university jointly owned by Osun and Oyo states. You can imagine how Oyo State is treating Osun indigenes in that university now. Almost all our workers there (LAUTECH Ogbomoso) have been sent home. The quota has reduced drastically; Osun is now being treated as alien in the university jointly owned by us, just because of the carrot dangled before Governor Oyetola by Seyi Makinde that he was going to pay N8billion in installment.

Even if you are going to quit ownership of that university, you should be prepared to have your own university. Oyinlola used just N2billion to build that Osun State University that has six campuses; why can’t he take it along that line? All the students of Osun State that have been denied admission at LAUTECH, where are they going to? All the workers being abused there, where are they going to? You should consider that and establish your own university. Flyover is not our priority. We are not in Lagos where you have perennial traffic snarl. I have never seen anybody spending 10 minutes at that Olaiya junction, nobody has ever spent 10 minutes there. So, do we need a flyover in that place? There are some other typical areas begging for our attention. I think that is where a government that is focused should look into, not overhead bridge, we don’t need that.

It was reported that your party had endorsed Senator Ademola Adeleke for the Governorship election next year. Is this true?

The stand of our party is that this man, Senator Ademola Adeleke, performed wonderfully during the last elections. He has won two elections in quick succession. In the Senatorial election, he won nine out of 10 local governments. He defeated the sitting Governor before the abracadabra and remote control from Abuja changed the whole thing and since that time, he has not left us as a party. He has been looking back, performing his duty and looking at the welfare of party members. Every festive period, even during COVID-19 lockdown, he kept on doing things for us. So, if people are saying Adeleke is the one we want; if people are endorsing him right, left and centre, we as a party do not see anything bad in that. However, we are not saying that whoever that is interested should not come out. No! It shouldn’t be so. Let those who are also interested come out and vie.

“IN THE SENATORIAL ELECTION, HE WON 9 OUT OF 10 LOCAL GOVERNMENTS. HE DEFEATED THE SITTING GOVERNOR BEFORE THE ABRACADABRA AND REMOTE CONTROL FROM ABUJA CHANGED THE WHOLE THING AND SINCE THAT TIME, HE HAS NOT LEFT US AS A PARTY. HE HAS BEEN LOOKING BACK, PERFORMING HIS DUTY AND LOOKING AT THE WELFARE OF PARTY MEMBERS”

This is a democracy and we are going to have a primary election where the governorship candidate of our party is going to emerge. I want to remind you of one thing, in 2018, when Adagunodo was holding sway as party Chairman, the party threw its weight behind Akin Ogunbiyi. Adeleke didn’t even bother; he came into the election and he defeated the candidate of the party then. So, what are we saying? Whoever is interested, let him come out and contest.

Is it proper to say that the PDP has endorsed Senator Adeleke or he is just a favourite among the lot?

Adeleke, left, right and centre during our consultations with party executives and leaders in all the local government areas in the state, all what people are telling us is that we should not make the mistake of not presenting Adeleke for them as the party’s candidate, that they are ready to vote for him. So, when that is done like I said, this is democracy, whoever that is interested again should signify his or her intentions and contest the primary election that is coming up.

Don’t you see the leadership crisis currently rocking your party as a threat to the party’s chances next year? Hon Soji Adagunodo is still laying claim to the Chairmanship position despite the Court’s ruling in your favour?

How can Adagunodo? Anybody in a sane society will not even bother but will consider that one as the ranting of an unserious mind. The Executives at the State level wrote to the National body and passed a vote of no confidence on someone that he should be removed from office. The National set up a committee and an acting Chairman was appointed, in the person of Elder Sunday Akanfe Atidade. He was there for almost six months before the needful was done. The same Executives wrote a letter to the National saying that I should go and complete the tenure of Adagunodo and the National body endorsed and approved it. He challenged it in court and the Appeal Court has nullified whatever the lower court said. If you believe in the party, the party has said so; if you don’t believe in the party but in the court, the court has said so. So, what else again? He has no right to claim anything. What has he been doing? Have you seen him anywhere? Have you seen him issue any statement? It’s just a kind of beer parlour talk from Adagunodo.

Are you saying it’s not a threat to the chances of the party?

Of course. People have moved. All the wards, they are holding meetings. In all the local government areas, they are holding meetings. Where is he holding his own meeting? He is just making mouth wherever he is. He is not staying in Osogbo or anywhere around Osun State. He is just using the social media and wanting to cause confusion and no one is paying him any attention. We have moved.

Is there any step to make peace between Adagunodo and other aggrieved members in the PDP in preparation for next year’s poll?

Yes. We have been to the Saraki committee in Abuja. You know the National body set up a reconciliation committee, headed by Dr Bukola Saraki, former Senate President. Among members of the committee are former Secretary to the Government of the Federation, Anyim Pius Anyim; former Governor of Cross River State, Liyel imoke; former Governor of Katsina State, Ibrahim Shema; in the House of Representatives, Mulikat Adeola. And we met them in Abuja and they are working tirelessly as they are doing across the country. So, very soon, they will make their report known.

A group supporting Dr Akin Ogunbiyi described Senator Ademola Adeleke as an absentee aspirant. Is this not a fresh crisis for the party?

It is not a crisis. It’s not their duty to say who is around or not. If Dr Ogunbiyi is interested, let him come out and tell people that he is gunning for Governorship in Osun State. When Adeleke comes around, what would they say again? People have seen seriousness in Adeleke. After the 2018 election, Ogunbiyi left and he just came around now. He has not been seen anywhere close to the party, so why would they say that someone is not around? We know why they are here for now and we know who sent them but we are not bothered about it. If he (Ogunbiyi) is interested, let him come out and contest the primary election. He contested the last time and he lost, so let him come and contest again.

Do you see the crisis in Osun APC as a plus to your chances?

I have been asked several times that I have not commented on the crisis in APC. The fact is that when they (Aregbesola and Oyetola) were together, supported by the Federal Government, we defeated them, so, if they are having crisis now, I don’t think anything is stopping us again. So, we are repeating what we did at that time. You can see what is going on in Nigeria today. What is going on in Osun State is not favourable to the citizens. People have learnt their lessons from the misrule of this government. Is it insecurity we are talking about? Oyetola has spent almost three years. What has he got to show for it? Nothing! Recently, he went about commissioning the road constructed in Alekuwodo, something the local government should have gladly done.

Recently, some PDP members in Ede defected to APC; there is speculation that some of the chieftains of Osun APC who have formed a splinter group may form alliance with PDP in unseating Oyetola. How do you react to this?

That is our own secret. I am not going to let the cat out of the bag now. If two people in Ede defected to APC, we have moved to almost all the local government areas in Osun and saw people defecting daily to PDP. Very soon, you will see the mother of defection in the state. So, we are not bothered about that. We will cross the bridge when we get to the river. Let us wait till then; we are pulling a big surprise on these people (APC). You will understand that the people of Osun State are not ready for this party now to come again. They have thrown us into humongous debts; debts that will take our children’s children years to pay back.