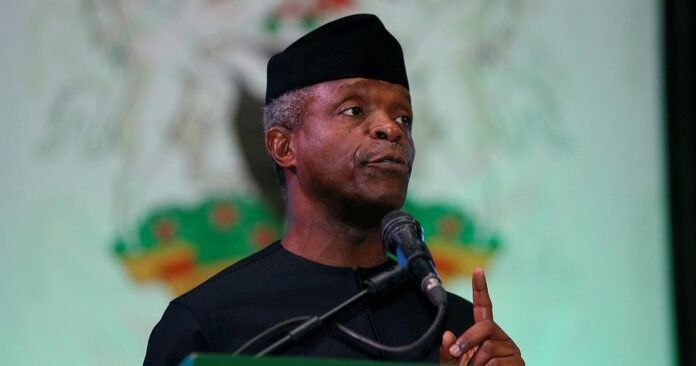 The Vice President of Nigeria, Professor Yemi Osinbajo, will declare the 20th National Sports Festival opened with the commissioning of facilities put in place by the host Edo State Government in Benin City today.

A report states that the country’s Number Two citizen will pay homage to his royal majesty, the Oba of Benin, Omo N’Oba N’Edo Uku Akpolokpolo, Ewuare II before proceeding the Dr. Samuel Ogbemudia Stadium for the ceremonial opening.

According to the programme of the Opening Ceremony released to the media yesterday, Edo’s rich cultural heritage will be on display with Nigeria’s genre-defying singer Fireboy DML (real names Adedamola Adefolahan) capping an evening of two hours of culture and music at the pitch on which several of the the country’s top footballers strut their stuffs.

Fireboy was the biggest winner at Nigeria’s Headies top music awards in February this year, taking home four gongs including the Best R&B Album of the year.

The country’s chief sports officer, Minister of Youth and Sports, Chief Sunday Dare, is also expected to officially welcome the athletes, and officials to the 20th edition of Nigeria’s ‘Olympic’ while Governor Godwin Obaseki and his Deputy, Comrade Philip Shaibu, will also be speaking on their readiness to host a Festival to remember for a long time.

The organisers said last night that to ensure compliance with the Covid-19 Protocol, there will be restrictions to the Samuel Ogbemudia Stadium with people gaining access with only invitation cards, while states will be allowed only 20 athletes for the ceremonial.

The Presidential Task Force (PTF) on Covid-19 has insisted that that all guests and athletes should obey laid down protocol.

A record 550 Volunteers will be on hand at Festival for a hitch-free event.

Meanwhile, Governor of Delta State, the defending champions of the festival, Dr Ifeanyi Okowa will today storm Benin City to be present at the opening ceremony of the 20th edition the state is hoping to win again.

Chairman of Delta State Sports Commission, Tonobok Okowa, told reporters at the Ogbemudia Stadium yesterday that the governor would be present physically alongside some of his cabinet members.

Delta State won the last edition of the festival in Abuja.

“The governor will be here for the opening ceremony,” Okowa said. “He is not just coming to sit at the VIP, he will be with the athletes to lead them in the match past because he always love to relate with them as his children.

“He was there in Abuja and he has promised to be available again this time around. It is going to be a good motivation for the athletes, seeing their governor matching with them,” Chairman of the Delta State Sports Commission concluded.