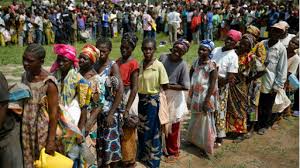 Receiving the bags of rice branded with the picture of the national leader of the All Progressives Congress (APC), Asiwaju Bola Tinubu, the speaker of the Borno State House of Assembly, Hon. Abdulkarim Lawan, commended the APC national leader and Hon. Obasa for the donation and delivery.

Flagging off the distribution with officials of the State Emergency Management Agency (SEMA), the Speaker, Hon. Lawan, said the intervention was first of its kind since Boko Haram crisis, hence he called on other individuals to emulate the gesture.

He said the donation came at the right time, considering the economic hardship faced by traumatised IDPs in the State.

Lawan said Governor Babagana Umara Zulum, National Emergency Management Agency (NEMA) and other humanitarian agencies have been doing a lot in managing the plights of IDPs in the state.

Unfortunately, due to the devastating effects of the Boko Haram crisis, there was much concern on meeting the economic demands of the displaced families and those living in host communities, hence, the donation was a welcome development and timely at this critical period.