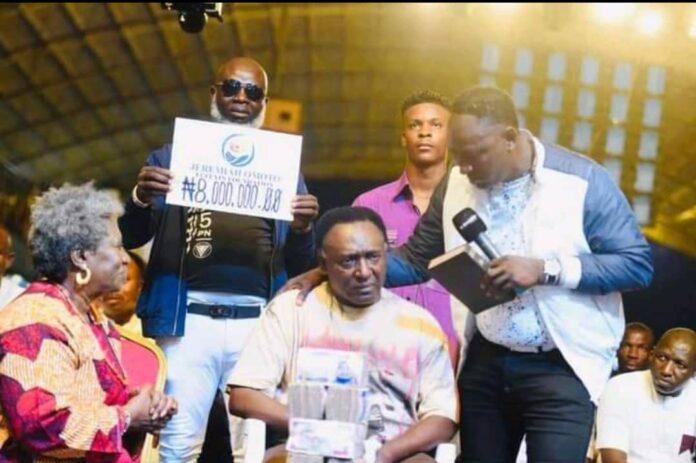 Nigerian Nollywood actor, Thespian Clem Ohameze was yesterday left in uncontrollable tears as he received  a relief fund of N8 million from Prophet Jeremiah Fufeyin to support his medical needs.

The founder of Christ Mercyland Deliverance Ministry, Warri gave Ohameze the money during service on Sunday.

The actor said his health challenges started after he had a car accident some time ago.

The movie star also said that after the accident, he had visited the hospital where an x-ray was conducted on him to ascertain the extent of injury sustained.

According to him, the result of the x-ray showed that his “cervical vertebrae 3 had collapsed on the 4th, thereby causing pressure on my spinal cord and the retardment of the lower limb”.

Ohameze said he was treated for a while and he got better.

He, however, said he noticed that he started having difficulty walking later.

The veteran actor after that after undergoing a further scan, he was told that he would have to undergo a procedural surgery to separate the cervical vertebrae three from four to free the spinal cord permanently.