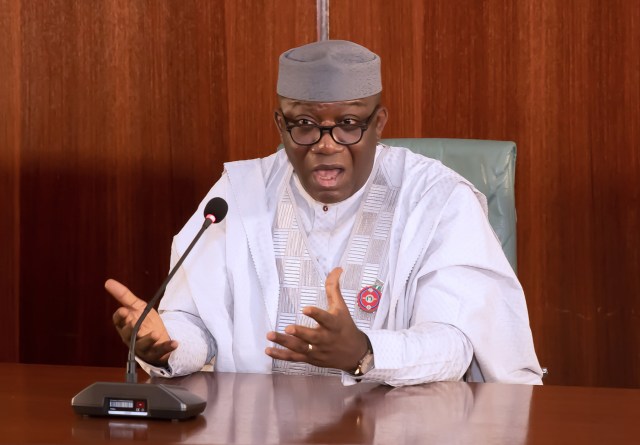 Gov. Kayode Fayemi of Ekiti, says the country’s security challenges are surmountable only if Nigerians were determined to tackle it with sincerity.

He made the assertion on Friday in Ibadan at a symposium organised by Hon. Shina Peller (APC- (Iseyin/ Itesiwaju/ Kajola/ Iwajowa Federal Constituency).

The ‘National Security and Peace Symposium’ was organised to commemorate Peller’s 45th birthday.

Fayemi said that Nigeria could better surmount her security challenges if the people understood the challenges and are committed to transforming Nigeria for the better.

“For me, It is a pleasure and privilege to be here to honor Shina, his family and lead generation initiative. We are all here because we believe in a course we need to commit ourselves.

“At the moment, we know our country is going through a lot of challenges, but these challenges are not insurmountable. These are challenges we can overcome.

“Countries with security situation that are worse than this have overcome it. We can achieve this if we are single-minded.

“If we are honest, purpose driven, dedicated and determined, we will put behind all the triggers of violence in the land,” he said.

The governor listed some of the causes of insecurity in the country as inequality, poverty and unemployment, and called for intensified efforts at eradicating all.

He said that the best way for youths to contribute positively to their communities was to get themselves involved in politics.

Also Speaking at the syposium, Mrs Florence Ajimobi, the widow of former Gov. Abiola Ajimobi, said that Nigerians have roles to play in ensuring a better Nigeria despite the level of insecurity.

Ajimobi, who congratulated the celebrant, said the symposium offered all the unique opportunity to reflect on the problem that has made the society unsafe.

“As Nigerians, we all have different roles to play in public in spite of the level of insecurity in our society.

“Today’s symposium offers everybody the unique opportunity to reflect on this problem which has made our society unsafe.

“It also offers us the opportunity to further interrogate the role of institution’s and those saddled with the responsibility of keeping all of us safe.

“Vis-a-vis the role expected of us as citizens to complement these hardious part of ensuring a safer society,” she said.

Albert, who was the guest lecturer, said the most important thing is for government to start investing more on approaches that could give the desired results.

The professor of peace and conflict studies at the University of Ibadan, advised that government should engage the National Orientation Agency (NOA) to educate Nigerians on the need for peace in local communities.

“The statutotry role of the agency established in 1993 is to re-orientate Nigerians and encourage them to take part actively and freely in discussion and decision affecting their collective welfare.

“Politicians claiming that the security of Nigeria was worse than what it is now contributed to the loss of confidence in the future of the country by its citizens.”

“On the balance, it is argued here that there is a little the international community can do to help Nigeria when the country is not doing enough to help itself.

“Hence, what matters most at the moment is for Nigeria now to start investing more on its whole of the nation, society and nation approaches,” he said.

NAN reports that among those present at the event were former Gov. Adebayo Alao-Akala, Sen. Musiliu Obanikoro, Oba Saliu Adetunji, Olubadan of Ibadanland and Oba Rasheed Akanbi, the Oluwo of Iwo.

Others are Hon. Akin Alabi, Hon. Tolulope Akande-Sadipe, Mr Adebayo Shittu, former Minister of Communications and other well wishers from across the country.