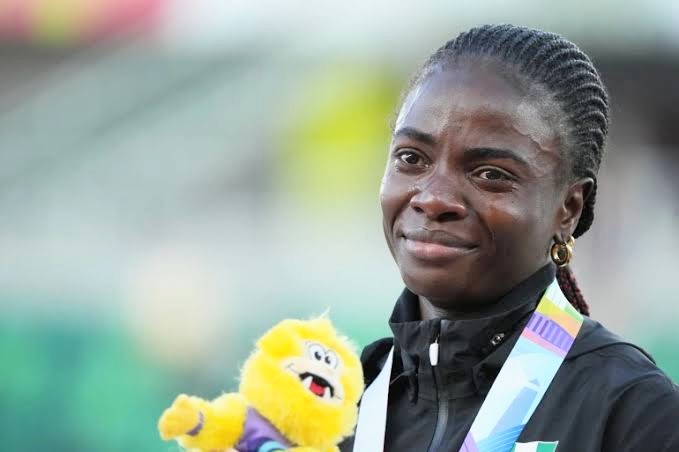 Amusan raced to victory in the 100m hurdles final, finishing with a time of 12.12secs, shattering Kendra Harrison’s 2016 world record by 0.08secs at the event.

The 25-year-old’s feat was one of a succession of athletes to smash world records or their own personal best times at the event. In the women’s 100m hurdles alone, 12 of the 24 semi-finalists recorded their best times ever – and BBC pundit Johnson was instantly skeptical of the times recorded in the stadium.

“World record broken by .08! 12 PBs set. Five national records were set. And Cindy Sember quote after her PB/NR ‘I (thought) I was running slow!’ All athletes looked shocked (sic).

But fans on Twitter were not pleased with Johnson’s comment for mentioning Amusan’s world record, with one accusing him of ‘hating.’

Victoria also wrote via her handle @victoriajohn782, “Keep trying to be relevant…this time is for Tobi (Amusan). Hide that your bamboo face.”

Another user @KardinalSmart tweeted, “It’s even not funny. We all saw her hard work and perseverance but this man (Johnson) opened his buccal cavity to discredit Amusan and her life-changing moment. He will get what this means here on Twitter.

@aisha_okay also wrote, “Let’s all just start reporting his account so maybe he will lose his freedom to post any of this rubbish again.”

Mide Samuel also said the likened Johnson’s comment to that of a comedian. He wrote, “Johnson sounds like a comedian. Can I ask a friend? Congratulations Tobi Amusan. Michael Johnson is a m** man.”

@AkinwandeSavage also faulted the American legend for being envious of Amusan’s feat. “@MJGold if there is a word called ‘hatist’ that is what you are, you are not happy for her success and I wonder how you became successful. Shame on you, Michael Johnson!  Amusan is the best.”

@Oghenero_Adhaka also wrote, “Your mind is bitter, you hater! See your face like the tip of generator spark plug.”

Another Twitter user, calling himself Slim Daddy, wrote, “Michael Johnson are you naturally this dumb or do you have to put in the effort?

“Why don’t you channel your energy to recovering from your stroke you Black racist!”