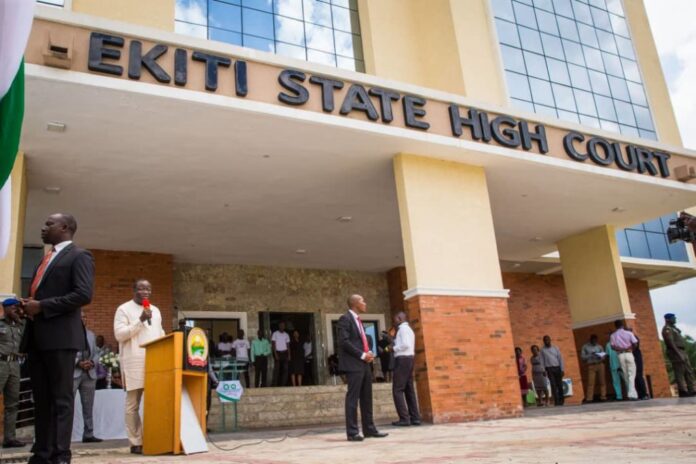 An Ekiti State High Court, Ado Ekiti Division, has sentenced four men to death by hanging over the murder of a traditional chief.

The convicts, Sunday Aernana (30); Jonathan Elijah (19); Sule Obasanjo (30); and Moses Iorna (24), were arraigned on three counts of conspiracy, murder and attempt to murder.

The charges read in part, “The defendants on April 5, 2020, at Iyemero Ekiti, in the Ikole Local Government Area of Ekiti State, did conspire to murder Chief Sola Fatunla and also attempted to murder one Adebo Tadeni.”

In her testimony before the court, Adebo Tadeni, who said she was married to one of the defendants and had children with him, said, “I left him due to frequent misunderstanding between us but he later came to apologise and promised to be a changed person.

“He alleged me of having affairs with Chief Sola Fatunla; he threatened to kill both of us if he ever saw us together again. The matter was reported at the police station. He was arrested but begged for forgiveness; he wrote an undertaking to be a good boy to the chief.

“On the fateful day, he lured me and the deceased to a farm at Iyemero Ekiti, pretending to help him settle a rift between him and one Ebira man. On getting to the farm, we met the other defendants drinking gin; they seized my phone and Chief Fatunla’s phones.

“He ordered them to start beating us with cutlasses; they later tied chief to a tree. I was also tied to a tree at a nearby location, but I could see them. One of them broke the gin bottle on chief’s forehead and he became unconscious. He poured petrol on his body and set him ablaze.

“I escaped from where I was tied and ran away. I went to report the matter at a police station. Thereafter, the defendants were arrested in Kwara State while trying to escape.”

The prosecutor, Ajibare, called six witnesses and tendered the defendants’ statements, photographs of the deceased burnt body, a medical report, among others, as exhibits.

The defendants, who spoke in their own defence through their counsel, called no witness.

In the court judgment, Justice Adekunle Adeleye, who said the prosecution established through evidence the intention of the four defendants to commit the murder and attempted murder, said, “This is contrary to sections 516, 316 and 320 of the Criminal Code Cap. C16, Laws of Ekiti State, 2012.”

“Each of the first, second, third and fourth defendants are hereby sentenced to seven years’ imprisonment each on count one (conspiracy), death by hanging on count two (murder) and life imprisonment on count three (attempt to murder),” the judge added. (Punch)