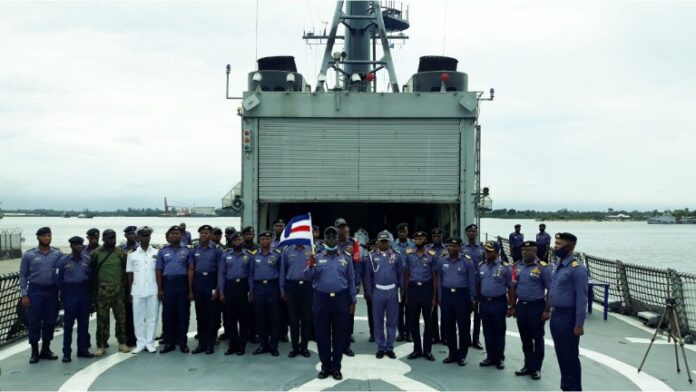 The Nigerian Navy (NN) has recorded significant progress in the recapitalisation of its fleet, with dozens of vessels commissioned in 2020 and more are on the way.

These acquisitions come as the service attempts to deal with a continued spate of pirate attacks in the Gulf of Guinea, as well as oil thieves and other criminals in the Delta region.

The director of Information, Commodore Suleman Dahun, said about 170 riverine patrol boats were built in Nigeria and more acquisitions are planned.

He said that just last week, France’s Ocea shipped the third and fourth C-Falcon interceptors (P273 and P274) to Nigeria, via cargo ship.

He added that the two additional 35 metre FPB 110 boats were delivered by the end of 2020.

He disclosed that Ocea has also won three tenders for two additional FPB 110, one OSV 190 SC-WB and four C-Falcon vessels.

Ocea had, last year in September, launched a new hydrographic survey ship, the Lana, which is expected to be delivered by April 2021 to the Nigerian Navy.

“The Nigerian Navy is also expecting four 17-metre Suncraft Manta boats from Malaysia (these were built in 2020), while Damen is set to deliver two 40-metre fast patrol boats. The Damen boats are being built at its facilities in Vietnam.

“On the smaller end of the scale, Suncraft has supplied 25 of its 9.5 metre long rigid-hulled inflatable boats (RHIBs) and 15 of its 8.5 metre RHIBS.

“Another 90 small boats are either expected or have been delivered to the Nigerian Navy.”

On the aerial side, he said the Nigerian Navy has taken delivery of a single AW139 helicopter from Leonardo Helicopters and is in the process of procuring 14 unmanned aerial vehicles (UAVs) to enhance response capability, through South Africa’s Epsilon and CACTIC in China.

“These are expected to be delivered within the current year,” he added.