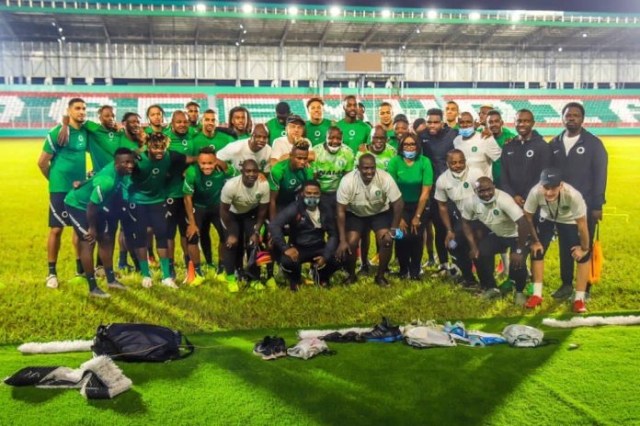 Live watching of Super Eagles match with Crocodiles of Lesotho on Tuesday at the Teslim Balogun Stadium, Surulere, Lagos, is restricted to only few thousands fans.

The Chairman of Lagos State Sports Commission (LSSC), Sola Aiyepeku, made this known on Friday in an interview with the News Agency of Nigeria (NAN) in Lagos.

The match is an African Nations Cup qualifier.

“The Africa Cup of Nations (AFCON) qualifying match between Nigeria’s Super Eagles and their counterparts from Lesotho will be played under strict adherence to COVID-19 protocols, the Confederation of Africa Football (CAF) has ordered.

“What this means is that the chance of Lagos fans watching their darling Eagles live at the Teslim Balogun Stadium in Surulere on Tuesday, March 30, is restricted to just a few thousands fans.

“Authorising Nigeria as the first African Nation to have fans in the stadium at this time speaks volumes of CAF’s confidence in the country and our ability to cope with strict crowd control demands.

“Lagos has made plans to abide by CAF’s guidelines by meeting all requirements,’’ he said.

Aiyepeku noted that it was unusual for Eagles not to play before a full house.

“We all have to make sacrifices to ensure all things work out well.

“This is for our long-term good, bearing in mind the situation in which COVID-19 has put the entire globe.

“On this note, we will strictly abide by CAF’s decisions on the need for fans control as it is a necessary decision for public safety.

“CAF has uniquely given us permission to have a very limited crowd in the stadium for the game because of COVID-19 restrictions in the interest of public safety,” he said.

The LSSC boss also told NAN that match tickets were not open to the general public.

“We are working with the Nigeria Football Federation on a strict selection process for the few fans that will be in the stands.”

He said that fans without valid tickets would be turned back at the entrance of the stadium, adding that security checks had been put in place for the encounter.

He also said that COVID-19 protocols would be strictly observed.

“We know most people in Lagos really want to see the Super Eagles, and we are hopeful that as we all continue to do our parts in the effort to fight this pandemic, very soon, Super Eagles will be able to play in Lagos before a full capacity crowd.

“The state government is working hard to successfully host the match as all hands are on deck to ensure both Super Eagles and Lesotho contingents enjoy Lagos hospitality throughout their stay in the state,’’ he said.

Aiyepeku also said that fans would not be allowed to watch the Super Eagles train at the stadium, in accordance with the CAF rules.

“In the same vein, football fans are not allowed to watch Super Eagles training sessions ahead of the Lesotho game coming up on Tuesday.

“Our fans can follow live telecast of the match at home,” he said. (NAN)