Nigeria Air will be delivered as a “parting gift”, Buhari vows 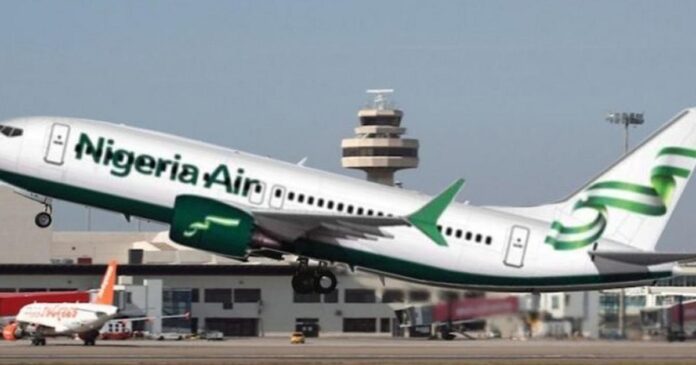 President Muhammadu Buhari in the course of the week assured that the promised National Carrier would commence flight operations on or before December this year.

The president gave the assurance at the 3rd Ministerial Performance Review Retreat on Monday in Abuja.

According to him, the establishment of the National Carrier for Nigeria is at 91 per cent completion, saying the feat is being boosted with the certification of Lagos and Abuja International Airports by the International Civil Aviation Organisation.

A reliably source told journalists that the Federal Government had already taken delivery of nine out of the 20 training aircraft meant for the smooth preparation for the Nigeria Air project.

On the economy at the retreat, the President restated that the country had witnessed seven consecutive quarters of growth, after negative growth rates recorded in the 2nd and 3rd Quarters of 2020.

According to him, high-impact projects have also been implemented across the country meeting the yearnings and aspirations of Nigerians.

The president highlighted remarkable progress made in the areas of agriculture, infrastructure, security, health and anti-corruption, among others.

He told participants and guests at the retreat, including the Keynote Speaker and immediate past President of Kenya, Uhuru Kenyatta, that over 3,800km of roads had been constructed across the country.

The presidential candidate of the All Progressives Congress (APC), Asiwaju Bola Tinubu, who also addressed the participants on Tuesday, pledged to build on the legacies of President Muhammadu Buhari, if elected as president in 2023.

Tinubu, who made an appearance at the retreat on the invitation of the organisers, commended Buhari for doing so well for Nigeria since he assumed office in 2015.

Also at the closing of the retreat on Oct. 18, Buhari warned Ministers, Permanent Secretaries and Heads of Government Agencies not to abandon the business of governance for electioneering, saying ”any infraction will be viewed seriously”.

He told participants that with the commencement of campaigns towards the 2023 general elections, the business of governance must continue to receive the needed attention during this period.

The president, who signed the Executive Order 012 on Improving Performance Management, Coordination and Implementation of Presidential Priorities, directed the Ministry of Transportation and relevant security agencies to ensure the provision of maximum security along the nation’s railway corridors.

On Oct. 19, the Japanese Prime Minister, Fumio Kishida, commiserated with Buhari after severe floods claimed many lives and affected millions in the country.

In the  condolence message, the Japanese prime minister expressed deep sadness over ”the recent floods caused by heavy rainfall in many states in the Federal Republic of Nigeria which have claimed many precious lives and forced many people to evacuate”.

The Minister of Communications and Digital Economy, Prof. Isa Pantami, confirmed this to State House correspondents shortly after the president appended his signature on the bill to become an Act.

According to Pantami, the new Act will come into effect with so many economic benefits for the country.

On the same day, the Nigerian leader received a Special Envoy from President Julius Mada Bio of Sierra Leone, where he wished the West African country best of luck in its general elections, billed for June 2023.

Buhari said: “I am pleased that you are pursuing your political programmes effectively, just like us. We wish each other the best of luck.”

The Special Envoy, Andre Thomas Hope, said that his country was bidding for a non-permanent seat in the United Nations Security Council, and solicited for Nigeria’s support.

NEAPS was set up to recognise distinguished public service to Nigeria, either contributions to individuals, state or local community, or the public through excellence in leadership, service or humanitarianism.

The president inaugurated the Presidential Campaign Council (PCC) of the All Progressives Congress (APC) as well as unveiling the Action Plan of the APC Presidential Candidate, Asiwaju Bola Tinubu, in Abuja on Friday.

At the event, Buhari says the APC-led Federal Government has ”managed to make Nigeria stable,” laying a solid foundation for progressive growth despite socio-economic challenges facing the country.

According to him, the APC-led administration has continued to stabilise the country despite the unfavourable circumstances of global economic downturns, COVID-19 pandemic and very low international oil prices resulting in low revenue.

Buhari concluded the week with the inauguration of the Pinnacle Oil and Gas FZE Terminal in Lekki, Lagos, on Saturday, saying the operations of the facility will ease congestion at the Apapa Port area.

In a video message at the inauguration of the facility, the president said it had also reduced cost and delivery of petroleum products distribution to many parts of the country.

He congratulated the Chief Executive Officer of Pinnacle Oil and Gas Ltd., Mr Peter Mbah, for establishing the massive terminal facility and for providing hundreds of jobs for Nigerians.