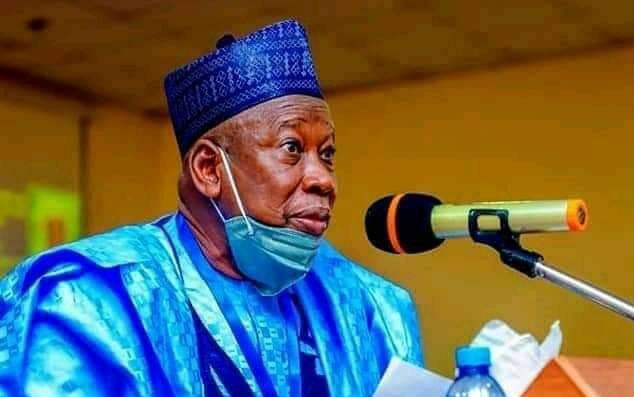 Kano State Governor, Abdullahi Ganduje, has described as unjustifiable claims attributed to a former Secretary to the Government of the Federation, Babachir Lawal, that the Ganduje Foundation, a philanthropic organization, was being used by him to allegedly force some Christian faithful to join Islam.

A statement issued on Wednesday by the Kano State Commissioner for Information, Mallam Muhammad Garba, described the comment as “totally false considering that, while there is no compulsion in religion, Islam gave individuals the freedom to choose their own religion, and also provided non-Muslims with considerable economic, cultural and administrative rights.”

The governor, according to the statement, assured that the Muslim-Muslim ticket would not in any way result in the neglect of Christians in the country.

He appealed to the former SGF, Christian party members and other Nigerians “to be mindful of their utterances, especially on religious matters and support the APC for quality leadership that will deliver the country from its challenges.”

According to him, there was never a time any Christian or non-believer was forced to embrace Islam by the foundation because it negated the teachings of Islam, but are called to Islam at their wish just as the missionaries go to villages in Kano to invite non-believers to embrace Christianity.

Ganduje said that it was “unfortunate that at a time when the country need to be united for national development and religious tolerance, a man of Babachir’s caliber, who is highly respected, would spread falsehood without much consideration to his position in the All Progressives Congress and closed relationship with the party’s flagbearer, Asiwaju Bola Ahmed Tinubu.”

He said that going by its activities, the foundation is not faith-based “but purely philanthropic in which case, non-Muslims also stand to benefit from the services it renders.”

The governor explained that the Ganduje Foundation “was set up about 40 years ago and is engaged in philanthropic, humanitarian and charitable activities that included medical, support and assistance to the needy in the society, particularly the orphans and the physically challenged, medical outreach to attend to those with diabetes, hypertension, malaria, dental as well as ante-natal and maternal care.’

He added that since its establishment, the foundation has built many schools, healthcare centres, distributed free school uniforms and instructional materials to new intake in primary schools, construction of boreholes and mosques.

Others include the distribution of food items to the orphanage and Muslim communities during the Sallah and fasting period, the Christian community during the Christmas and Easter period, provision of medical assistance to the needy as well as other philanthropic activities.

Ganduje stated that available statistics indicated that “no fewer than 380, 000 people have benefited from the foundation’s Eye Care Programme that included treatment for cataract and glaucoma, as well as distribution of medical glasses.”

“Governor Ganduje always stands for religious harmony in Kano as exemplified by the administration’s creation of the Ministry for Religious Affairs, where the state chapter of the Christian Association of Nigeria is a partner and enjoys a good working relationship with the governor as well as the introduction of an Inter-Faith Dialogue that promotes religious harmony between Muslims and Christians in the state.

“Governor Ganduje’s disposition on religious tolerance informed his administration’s stance on guaranteeing religious freedom and association for ethnic nationalities in the state, which earned him recognition and conferment of traditional title of Agu Na Eche Mba of Igbo land by the Chairman, Abia State/South East Council of Traditional Rulers, Eze Eberechi Dick and another chieftaincy title conferred on him and his wife as Aare Fiwajoye of Ibadan by Olubadan, Oba (Dr.) Senator Mohood Olalekan Ishola.”