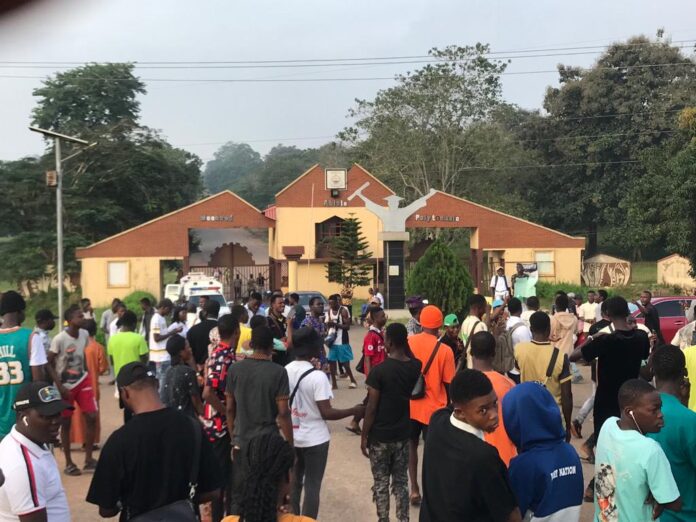 The Moshood Abiola Polytechnic students in Abeokuta, the capital of Ogun State, marched out on Monday morning to protest a fee increase.

The students flocked to the university entrance as early as 6:00 am, gyrating and waving placards to express their grievances, with men of the Nigeria Police Force also present at the scene.

While the state wing of the National Association of Nigerian Students, backing the students in the protest, is alleging an increment in fees for both the fresh and returning students of the institution, the management of MAPOLY said the increment only affected the fresh students.

A statement signed by the Chairman and Public Relations Officer of NANS, Ogun Joint Campus Committee, Damilola Kehinde and Olufemi Owoeye, partly read, “We are disheartened to converge here today, not for celebration but to decry the suffering and panic the management of MAPOLY has subjected us to as students. Our offense as Nigerian students is that we want to be educated and the Dr Adeoye Odedeji-led management of MAPOLY is saying education is not for the poor.

“Few months ago, in the last academic session, tuition fees for both the National Diploma and the Higher National Diploma students were increased, including part time students, whose figure was not accurately given. We resisted this increment and came to a benchmark of reduction in the initially added amount after due consultation.

“The clear promise made to the student body by Dr Odedeji and other members of the management team was that there would no longer be increment. At least, not in his own time as the acting Rector. Little did we know that he was only waiting for the state government to confirm his appointment as substantive Rector before unveiling his policy to make MAPOLY unaffordable for the masses.

“Without considering the economic conditions of parents and guardians, tuition fees were increased outrageously again for two consecutive sessions. This is the highest level of discomfort any management could think of putting the students through.

Meanwhile, the Dean of the Division of Students Affairs, Mr Ajani Sodiq, speaking to our correspondent on Monday morning, noted that only the potential fresh students were affected.

“Nobody has increased the tuition or any fee for the students. What is added is for potential students, that we don’t even know yet. But some people believe that because they have done their ND and they’re coming back for HND, they should hold the polytechnic down,” the Dean said.

“What was added was N20,000 registration fee for fresh students which we’re yet to get.

“And because of agitations here and there, it has been slashed to N10,000 naira. Yesterday (Sunday), for more than five hours, we were having meeting. Our students (the Students’ Union Government) are not involved (in the protest), but some people under the guise of NANS believe they must truncate the examinations.

“The money does not affect the current students,” Mr Ajani added. He noted that even if NANS wanted to solidarise with the affected potential students, “it’s still by the way of plea.”

He added that the N35,500 allegedly increased had been like that for a while and was not increased.

A student, who confided in our correspondent on condition of anonymity, said the SUG had failed to take up issues as expected.

“The school management, after increasing our tuition fee by seven thousand naira last this session, they also increased the form application from N12,500 to N17,500 and now they just added N20,000 to the Acceptance Fee of 35,500 before, which has become a total of N55,500 to accept admission,” he said.

“The union has failed and we have been agitating under the umbrella of concerned students,” he added.