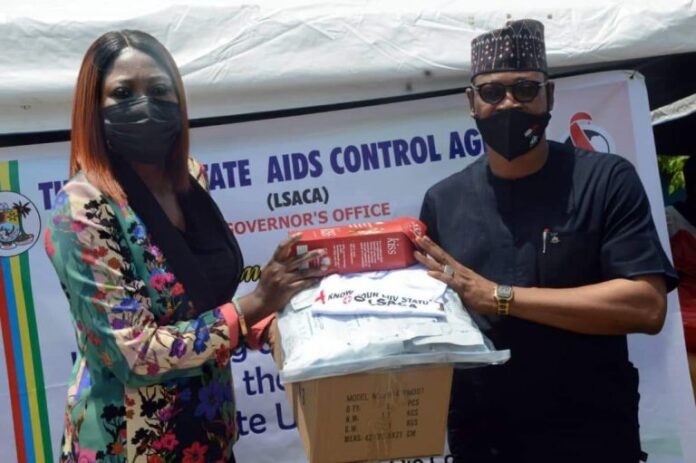 The Lagos State AIDS Control Agency (LSACA) has extended the free HIV-Testing and Prevention Services to over 1000 Lagos State University students as part of the government’s efforts to stall the spread of HIV in the State.

Addressing students at the Ojo campus of the University, the Chief Executive Officer of the Agency, Dr. Monsurat Adeleke, stated that the outreach is targeted at youths which the State Bureau of Statistics estimated at 43% of the total population of Lagos State.

She explained that the group is highly vulnerable to HIV infection due to their low-risk perception with HIV prevalence of 1.7 % in females and 0.7% amongst male of age 15 – 49 years, noting, however, that Ojo LGA has the third-highest HIV prevalence (2.5%) in the State, according to the National HIV/AIDS Indicator and Impact Survey report (NAIIS 2018).

Dr. Adeleke said, “To achieve the mandate of HIV prevention in the State, these targeted interventions were strategically designed to attain the global epidemic control of HIV/AIDS, through the Joint United Nations Programme on AIDS (UNAIDS) 95-95-95 targets by 2025”.

This, according to her, means that “95% of the people living with HIV should know their HIV status, 95% of HIV positive individuals should be initiated on antiretroviral (ART) drugs and 95% of individuals on antiretroviral (ART) drugs should achieve viral suppression. The achievement of the 95-95-95 initiative is a key step towards the eradication of new infections by the year 2030”.

The LSACA CEO opined that the outreach provided students the opportunity to know their HIV status and adopt positive behavioural change, stating that those that tested positive for HIV shall be referred to the HIV treatment facilities in the State, where they would be initiated on antiretroviral drugs to attain the third 95% – viral suppression, which will lead to achieving U=U (Undetectable viral loads = Untransmittable virus).

She emphasised the importance of HIV counselling services for lifestyle modification on safe sex practices and HIV prevention with Information, Education, and Communication (IEC) materials as well as free distribution of condoms.

While noting that the HIV Self-Testing pack will be deployed with practical demonstration to increase the HIV testing services uptake by youths and residents in the area, Adeleke said the agency will adhere strictly to the Nigeria Centre for Disease Control (NCDC) COVID-19 protocols as demonstrated by the counsellor testers, who were fully kitted in their Personal Protective Equipment (PPE).

Appreciating the government for the laudable initiative, the Dean of Student Affairs in the institution, Dr. Tajudeen Olumoko, promised to continue enlightening the students on HIV prevention, while expressing concern that Ojo Local Government has the third-highest HIV prevalence in the State.

The President of the Lagos State University Students Union, Mr. Abdul-Basit Ashade, promised to sustain the sensitisation amongst the students on different platforms in the School and appealed to the Agency not to make the programme a one-off event.