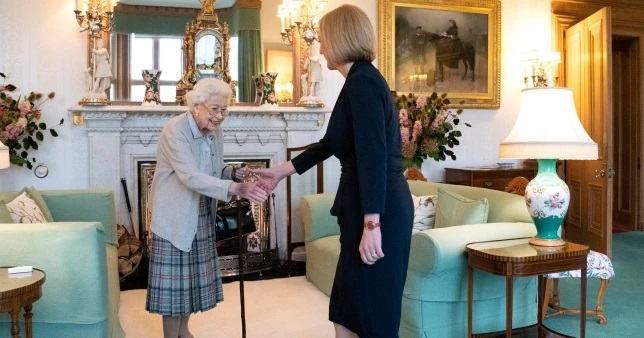 Liz Truss is officially the UK’s new prime minister after being invited to form a new government by the Queen.

Her Majesty was pictured shaking hands with the new Tory leader at Balmoral in Scotland this afternoon.

The frail 96-year-old smiled and clutched a walking stick as she greeted the 15th premier of her 70-year reign.

Today marks the first time the monarch has not travelled to London to appoint the country’s new leader.

There is little time for a honeymoon period, with her first week expected to include a huge announcement on freezing energy bills amid the cost of living crisis.

Her visit to Balmoral came shortly after Boris Johnson made the same trip to officially hand in his resignation – two months after his own party booted him out of office.

The departing PM arrived with wife Carrie for his final audience with the Queen this morning.