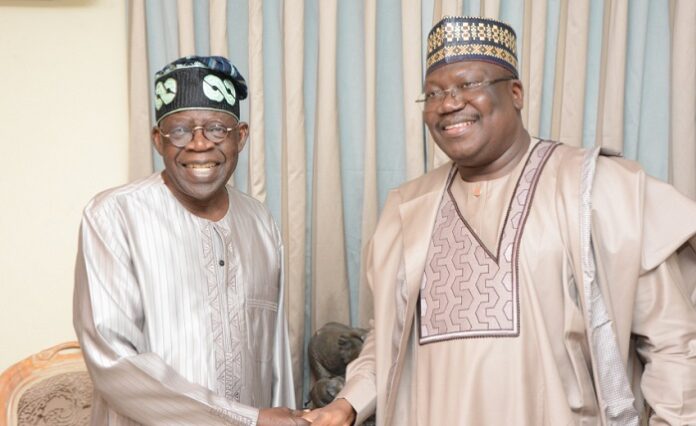 The All Progressives Congress would likely prevail in the 2023 presidential election with Asiwaju Bola Tinubu as its nominee and Kashim Shettima as his running mate, according to Nigeria’s Senate President Ahmad Lawan.

Lawan made the boast in his goodwill message at a special dinner organised for patrons and advisors of the APC at the Campaign Headquarters in Abuja.

The Campaign Patrons and Advisers are made up of former governors, National Assembly members, ministers, accomplished politicians, and former senior appointees of the Federal Government.

In his address, the Senate President attributed his confidence in Tinubu and Shettima to their achievements in their various political journeys.

He said, “The APC is on its way to winning the elections with Asiwaju Bola Ahmed Tinubu and Kashim Shettima who are great Nigerians that have achieved a lot in their various political journeys.”

Addressing the participants, Tinubu described the campaign patrons as politicians of repute who have worked hard for the party and sacrificed so much for the growth of democracy in Nigeria.

This was disclosed in a statement issued by Dr. Makut Macham, Director of Press and Public Affairs to the Director-General of the APC Presidential Campaign Council, Gov Simon Lalong.

Tinubu expressed delight that they were fully behind him and his vision to give Nigeria a “Renewed Hope” to make it better.

The former Lagos governor reassured them that if elected, he would do his best to tap the experience, knowledge and skills of technocrats from various parts of the country to address the challenges of the nation.

Shettima also applauded the audience, saying the wide acceptance of his joint ticket with the APC national leader demonstrates that Nigerians are moving beyond the politics of ethnicity and religious sentiments to considering capacity and excellence.

Governor of Plateau State, Simon Lalong, who obviously seemed impressed with the dinner reception, appreciated the campaign patrons and advisers over their conviction to support the Tinubu-Shettima ticket.

“While promising to do his best to carry all Nigerians along, the campaign DG said the PCC members have vast experience, connections and followership to ensure the campaign does not derail.

“The DG said he was looking forward to having them in Jos for the flag-off of the campaigns which will herald the nationwide movement to engage the people,” the statement said.