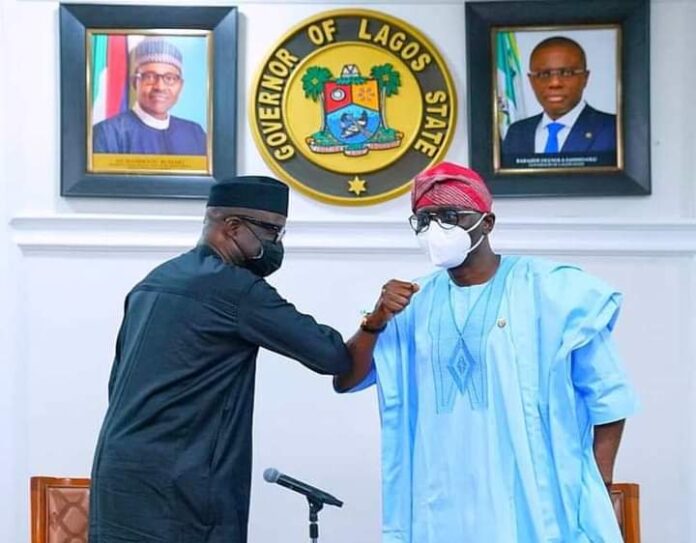 The Governor of Lagos State Babajide Sanwo-Olu on Wednesday stated that the sustained investment on infrastructure in Lagos State was a deliberate attempt to position the State’s economy for more inflow of trade and economic partnership.

The Governor made the this known when he received the Minister for Industry, Trade and Investment, Otunba Niyi Adebayo, in courtesy visit at the State House, Alausa, on Tuesday.

He said Lagos would not relent in its effort to scale up necessary infrastructure to drive growth and socio-economic development.

The minister led members of the National Action Committee on nationwide sensitisation on African Continental Free Trade Area (AfCFTA), which the nation entered into to deepen economic integration among African countries.

Sanwo-Olu said Lagos, as a sub-national player, had observed the process leading to the adoption of the continental trade agreement and positioned itself for market expansion across areas of collaboration.

The Governor said the State was ready to take advantage of AfCFTA for growth, stressing that a local action committee would be set up by the State Government to liaise with the Federal Government’s committee in order to streamline the trade agreement with the State’s economic agenda.

He said: “I congratulate President Muhammadu Buhari and the leadership of African Union who worked tirelessly to come to this trade agreement, which is on our continent’s interest. As a sub-national player, Lagos has quietly observed and waited for a time when we can take full advantage of the agreement for economic collaboration.

“We are ready to work with the National Action Committee to domesticate the agreement for good outcome. As commercial centre, we will play leadership role in the comity of States. We know there is need to scale up investment in infrastructure and build the capacity to be able to take full advantage of what AfCFTA has to offer for our economy. This effort will be sustained so that Lagos can fully be positioned to benefit from the free trade agreement.”

Sanwo-Olu observed that AfCFTA fitted into Lagos’ economic development blueprint, pointing out that the State had started to build capacity and put in place requisite services to pave the way for free trade.

He said the Deep Seaport being constructed in Ibeju Lekki was strategically initiated to boost the State’s GDP by achieving quick turnaround in the import and export of goods to African markets.

Sanwo-Olu said the Smart Meter Hackathon, a power intervention project being funded by Lagos Government, is one of the biggest Financial Technology (FINTECH) projects in Africa. This, he said, is one of the ways Lagos had positioned itself for continental trade and partnership before the adoption of enabling multilateral agreements.

Adebayo said the AfCFTA agreement sought to create single market for good produced in the continent, stressing that the adopted multilateral contract would give signatory countries access to combined GDP of $3.4 trillion.

The minister said since Lagos remained the arrowhead State for Nigeria’s export trade expansion, it is uniquely positioned to take full advantage of the AfCFTA agreement.

He said: “President Buhari charged the Committee to coordinate the activities of public and private sector stakeholders at all levels to undertake interventions to prepare Nigeria for trading under AfCFTA.

“Since bulk of Nigeria’s wealth, both natural resources and human talent, are domiciled in the States, it is a matter of necessity to domesticate the trade agreement at the State and grassroots levels.”