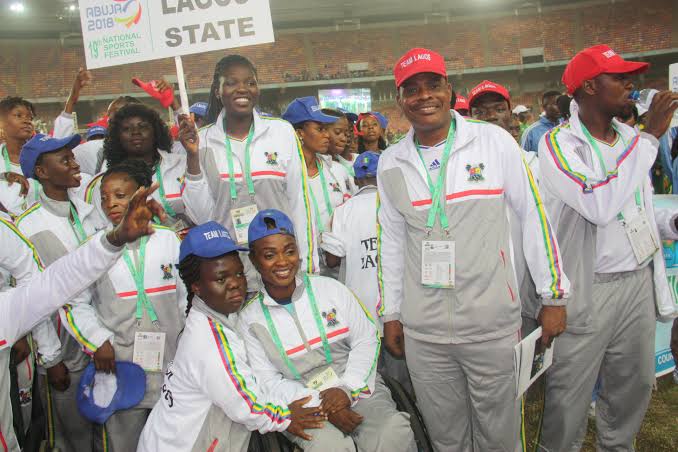 The News Agency of Nigeria (NAN) reports that the award ceremony for the 2018 contingent was held at the Molade Okoya-Thomas Indoor Hall, Teslim Balogun Stadium, Surulere.

The athletes were rewarded in accordance with medals won at the 2018 NSF in Abuja.

The Lagos State Commissioner for Youth and Social Development, Segun Dawodu, who commended the state government’s gesture, said that the ceremony was a testimony of the governments integrity of keeping its words.

“Lagos has a culture of fulfilling its promises and this is the essence of this ceremony today. We want to reassure the athletes of our commitment to their welfare.”

“Although the present government did not make the promise to them, but we are obliged to keep the promise made by previous administration in rewarding the athletes.”

This is a way to encourage the athletes to do their best in the coming NSF and that any promise made to them will be fulfilled, he said.

The Chairman of Lagos State Sports Commission (LSSC), Sola Aiyepeku, restated the commission’s resolve at taking care of their welfare for better outing during Edo 2020 in Benin.

“There has been a lot of bad experiences in the past, when some promised but failed, this is not our own style as we will fulfil our promises.

“We had dialogue with the sports loving Governor Babajide Sanwo-Olu on the backlog of the promise made to our athletes yet unfulfilled and he promised to see to it.

“The governor is desirous of the welfare of our athletes so he approved that they should be well compensated and it is ironic that we are doing it now after several postponements since January.”

“We have even gone ahead to solicit for funds for those going to the Olympics from the governor and he has approved N2.5 million for each athlete, he said.

The Lagos State Team Captain, Ahmed Koleosho, said that the cash reward would go a long way to motivating the athletes who had pledged to give their best at the Edo 2020 festival.

“This is the biggest morale booster for us and we expect our athletes to even perform better in their outings come NSF Edo 2020, he said.