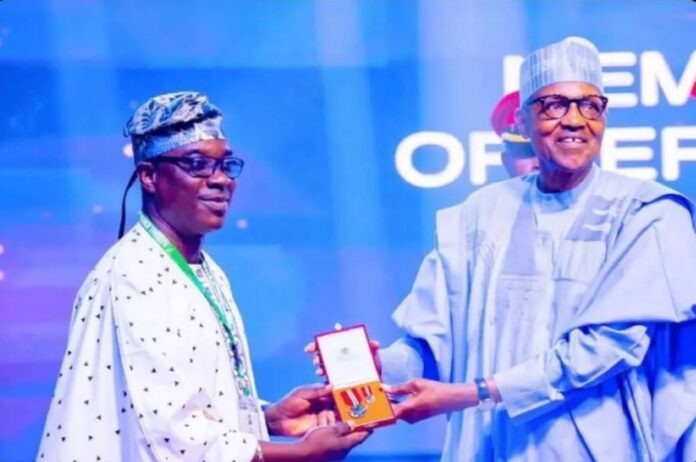 The king of Fuji music, K1 the ultimate and Mayegun of Yorubaland, has revealed how he feels receiving his MON national honour from President Muhammadu Buhari.

“Glory be to God Almighty, 50 years of my musical career that started from Agarawu Area in lagos Island, to the young and older people of my area then, that gave me opportunity to rise from the little ‘Fuji Lawa’ through the 3 stages of Ajiwere Ajisari competitions, organised by Ramblas at Onola playing ground, before I finally became the Star boy to lead Fuji Lawa to clinch the 1st position trophy that year and which immediately turned me into a full-time Fuji Musician.”

“My quest for stardom led me to the man I learnt the rudiments and dexterity as a powerful singer from. That is late Sikiru Ayinde Barrister, while working as a packer of instruments under him. It was him who taught me all I needed to know as far as singing is concerned.”

“Also to the recording company that discovered the musical talent in me and paved way for a successful musical journey,by having me recorded and equally exposed me to the open market,as a recording artist. Late Alhaji Ambali Ishola Adetunji, who scout for me to be signed on by Omo Aje Records at number 2, Ibomoh street in Agarawu area, owned by late Alhaji Saliu Akanmu Adetunji, who later became the immediate past Olubadan of Ibadan-land.”

“My first Album ‘Iba’ was released on my return from First Hajj & Prilgrimage to Mecca and Medina in the year 1979.” “My first national break was with my Album ‘Tala 84’ which sold in excess of over 400,000 copies a figure considered a Platinum at that time”

“Many successful Hits and albums followed right after that, like Tala Disco, Ori, Fuji Headline, Sun-splash, Consolidation, Omo Niger, Baby mi show color E and many more.” “American Tips and Anu Morigba sold in excess of over 5 million each Album.”

“I went on National tour round all the cities and states of Nigeria, followed by musical tours across African countries, before i finally made my UK tour in 1987, my first performance ever in London at Hammersmith Town Hall, Birmingham, Liverpool, Manchester and Scotland.” “American tour followed in 1990.

“This trip took me and the Band to several states in the US and Canada.Not forgetting my sensational performance at the Kilimajaro, in Washington DC.”

“I went to many European countries and I had Musical exposition, in Madrid and Barcelona Spain, Milan and Napoli in Italy, Bremen, Hamburg, Duesseldorf in Germany, Dublin Ireland.” “My gratitude goes to many people across the globe, who stood by me in the cause of my struggles to attain greatness in life and through Fuji Music.

“As part of my honors in life, Global legend of music after a scintillating performance at More-cambe Bay in Scotland at the WOMAD SEASIDE CONCERT performance and at READING in England, also at Royal Festival Hall Main Arena Hall in Waterloo, twice and Barbican Hall, also at London Accustic Hall near London Bridge,Spinks Festival in Belgium Womex Musical Festival in both Holland, Nijmegen in Netherlands, Berlin in Germany and Marseille and Paris in France to mention.

“As part of my honors in life, Global legend of music after a scintillating performance at More-cambe Bay in Scotland at the WOMAD SEASIDE CONCERT performance and at READING in England, also at Royal Festival Hall Main Arena Hall in Waterloo, twice and Barbican Hall, also at London Accustic Hall near London Bridge, Spinks Festival in Belgium Womex Musical Festival in both Holland, Nijmegen in Netherlands, Berlin in Germany and Marseille and Paris in France to mention just a few.”

“Back home in Nigeria,I can’t forget Poatson Musical exposition across the 4 angles of Nigeria. DP Lekki Allround held musical concert. I became the King of Fuji in 1993 after rigorous collection of signatures across Nigeria by the Association of Music Promoters & Artist Managers, in conjunction with First Television Station in west Africa NTA Ibadan.”

“Another unforgettable moment was the Benson and Hedges organised musical exposition across the country,here in Nigeria, both in lagos and Kano city.” I became the Oluomo of Lagos,a tittle given to me by His Imperial Majesty, Oba Adeyinka Oyekan,the late Oba of Lagos and the Mayegun of YORUBALAND title given by His Imperial Majesty Iku-Baba Yeye, Late Oba Lamidi Olayiwola Atanda Adeyemi III Alaafin of Oyo.

The biggest one came on 7th October 2022,when I received a National Honour Award Letter, from the Office of The Honourable Minister for Special Duties and Inter Governmental Affairs, that His Excellency Muhammadu Buhari GCFR, President of The Federal Republic of Nigeria, had approved the conferment of National Honour of MON (Member of the Order of the Niger) on me.”

“It is a great news ever to be received by me, I feel highly honored to be so considered for ‘A Big One’ like that, amongst Millions of fellow citizen.”

“When Femi Marshal,my Son and Chief Bayo Aremu Olasoju, who before his present position as the Chairman Isolo L.C.D.A led the band as C.E.O, as the prayer goes, Eni ba nse rere murasi, it will surely pay off one day.Congratulations Aremu Olasoju They both broke the news to me.”

“Having gotten this Hallmark of recognition from Home, speaks volume of the love every single Nigerian individual has for me or anyone to be so honored like that.” “I also see the honour as a recognition of my genre of Music ‘Fuji’ and as a symbol every one in that order look up to.I accept this with humility and sense of gratitude.”

“To every single Nigerian, lover of good things, music enthusiasts and all fans both home and abroad, especially The K1 Fans club under the leadership of the worldwide President, jibola Allison I thank you all.”

“My success story will be incomplete without mentioning this set of people who have made a big contribution in my musical journey,like,Alhaji Jimoh Ajao Salau (Ojomu), Alhaji Isiaka Kokumo Mogaji, Dayo Adekunle Omo Olomu, who pioneered the new style of Artist management.O yes he did.”

“I also thank Lanre Ijaola (Ijakoko) and my brother from Ijebu, Percy Ibikunle Ademokun, right from his days at Ogun Poly in Abeokuta, Ojere successful gang.” “I dear not forget you Otunba Femi Davies, Allahu Lateef Nasiru, Wale Omo Omotayo and many good hands along that line.” “Not forgetting you late (Prince) Adenrele Arimoro, who introduced me to many business opportunities I never imagine can work together with music side by side.”

“May your soul continue to rest in perfect peace with your creator in ALJANATA FIRDAUS and Late Lati Shittu and Joel Ajayi my pioneer Saxophonist of blessed memory.” “My sincere appreciation goes to Mr President and his cabinet, also to the leadership and members of both National Assembly (Senate/House of Representative),especially to you,Honourable Speaker of the House of Representatives, Rt Hon Femi Gbajabiamila who saw to this honor been done wholly.It was your doing and I can not thank you enough (Gbaja Omo Eko Pataki) you are great.” “Not forgetting you my brother, Wasiu Olanrewaju.

“Not forgetting you my brother, Wasiu Olanrewaju Smart, Chief of staff to the Rt Honourable Speaker, for sleepless night over my matter, Ire Ayo fun iwona pelu ase olorun.” “Our very own Mr Sellable, His Excellency, Governor of Lagos State,Mr Babajide Olusola Sanwo-Olu.I thank you soo very much sir, for your support over the years. Ijo ope lama muwa nigbeyin.”

“Of course to my backbone of all time great,Asiwaju Bola Ahmed Tinubu,Jagaban of Borgu,I say thank you.” “Leader of all leaders and my fortress of inestimable value.You mentorship of me over the years I shall never forget. God Almighty will make a resounding amen to all your request before thee Insha Allah Bikudratilah and in due course we shall have reasons to glorify God in the end.”

“Appreciation to you my Jewel,Emmanuella Ropo Ajike (Okin)nee ODEBIYI. Surely Eni ba kuniku lan ba jaiye, I thank you immensely for been there for me as always, God shall reward you abundantly in multiple fold”.

“To all members of my band, from Afiz Kareem (Ijapa) who is the band leader and also the band Captain Benjamin Omobolaji, Alhaji Kazeem Yusuf (Kc Je kon mo) my group head, Olamilekan Gaji my own brother, Monsuru Matti (Ako Monsuru) not forgetting you Akeem Soewu my brother. This is a shared honour and I shall never forget the journey we all stand to keep working on till it gets soo better than ever before, I thank you all.”

“To you my children, this is the height of love and respect a nation can showers on anyone who does it extremely well.”

“Remember to always payback with good deeds and expect one day it shall be your turn to answer to a nation that has done our family name in Diamond.” “I dedicate this honor to the man who double as my teacher and father, who also lead the pack of that same honors first in our genre of music, having gotten MFR before me his Son, who now has MON.”

“I am talking of Alhaji Sikiru Ayinde Barrister, who lives inside of me and never dies.”

Signed by Oluomo Olasunkanmi Ayinde Marshal, Mayegun of YORUBALAND (MON) Member of the Order of the Niger.