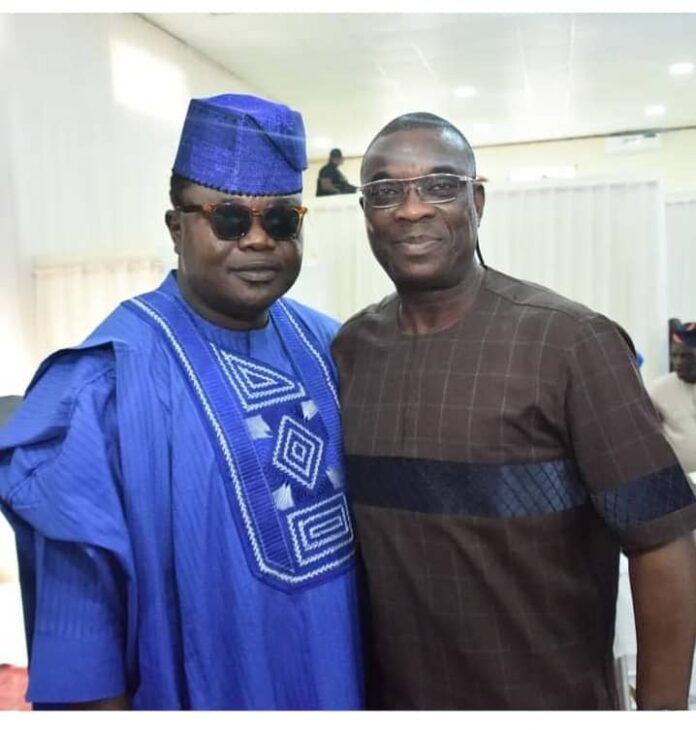 If heroes, champions are defined as people who make a difference or win in a competitive world or whose action or dispositions are considered to be larger than life, then Wasiu Omogbolahan Ayinde Olasunkanmi Marshall is undisputably a hero, writes BIODUN KUPOLUYI.

Not necessarily a war general or military man but more than ordinary in his sphere of influence in the society.
Today, in Nigerian music, his style of music: delivery and rendition are not only audacious but creative and reflects someone with the heart of steel.
With a huge fanatical following in music, he entertains us, teaches us, broadens and changes our world view to make the world a better place. For over three to four decades now, he has remained relevant, winning trophies for his creativity and remaining on top of the chart.
Even in politics, he walks tall, dines and wines with men of power and influence including the President of Nigeria, Muhammadu Buhari, National Leader of the All Progressives Congress (APC) and some governors in the South West of Nigeria.
So influential, that he is loved and wanted by the rich, powerful and ordinary people. He is such a different from his contemporaries in music, arts and entertainment.

At 65, his background is an open book to all. He sings about his grass to grace story from Agarawu, a bubbly community in Lagos Island, punctuating it with his co-travellers in life and witnesses.
He sings and speaks to us about politics, party politics, democracy, elections, education, health, bad roads and sundry matters that are most important to our lives.
He challenges government to be responsible and the citizens to be law-abiding.
I have found in him exemplary leadership in Fuji: enviable and creative. He bares no one grudge, because according to him, it distracts creativity and hinders progress. He, however has a word for those who plots his fall-pity.
His leadership reflects in the dexterity of his Ultimate Band, the discipline, the management and the ability to keep a steady and danceable beat that connects with fans at different occasions and most importantly, their welfare. Kudos to the Captain of the Band, Benjamin Bolaji and the General Manager, Afiz Kareem, arguably the longest serving member of the Band. Both of them are most unassuming and effective.
He has also found a good friend in Kazeem, popularly known as KC. If you smell or sight KC, bet K1 de Ultimate is not far away.
Both are like 5 and 6 now. Kudos also goes to savvy Kunle Rasheed, K1 de Ultimate’s Media Aide for keeping tab on the media.

K1 de Ultimate’s role in simmering the hitherto rivalry and mistrust that characterized Fuji music is commendable. He has through his headship, calmed warring musicians and many have since sheathed their swords, embraced peace and reaped financial successes.
I have found also in him loyalty and reward as exemplified in his support for loyal friends and handlers. From his closest friend, Bolaji Saheed, popularly known as Basia to his present and past Managers-Kokumo Gaji, Dayo Olomu Lanre Ijaola, Ayo Sonaiya to Percy Ademokun, arguably the longest serving with most innovative ideas and recently, Bayo Olasoju, young, dynamic and trusting enough to be launched into politics under his tutelage.

It is not fortuitous that Olasoju later emerged Vice Chairman of Isolo LCDA and won the election to be the Chairman.
K1 de Ultimate’s role no doubt propelled his victory and that would interest students of politics and historians.

K1 de Ultimate, has had his share of cyber bullying, criticisms maybe because of his support for a person, party or due to his silence, disregard for some generally accepted beliefs or cause, these and more have estranged him from his fan base or some people.
Since he bagged the title of Mayegun of Yorubaland conferred on him by Alaafin of Oyo, His Imperial Majesty (HIM) Oba Lamidi Adeyemi, his army of critics has ballooned.

But trust K1 de Ultimate. He found a profound, apt response to critics and naysayers in Ade Ori Okin. He believes critics can’t put him down.

Interestingly, you can’t hate K1 de Ultimate and hate his music. It’s his forte, stronghold and by the time it creeps on you, you are wowed and won over.
Like all superstars, K1 de Ultimate reeks of hedonism and don’t blame him. He works hard for the money. He plays three, four times in a week and not less than 22 times in a month, including public holidays.
Invariably, his wealth allows him to indulge his insatiable hunger for all things pleasurable, including cars, shoes and clothes.
Did you add women? Yes, he loves women. Who doesn’t? But one at a time. I pray and wish his latest wife, delectable Emmanuella Ropo, the best in the marriage. Ella, as I fondly call her is a fashionista and it reflects in Mayegun’s bespoke outfits on stage in recent time.
Unknown to many, Mayegun also believes in social causes, he gives to charity, religion and the needy.

His former house in Okota-Isolo, Lagos popularly known as Castle of Peace was donated to the Muslim Youth Forum (MYFO) to hold prayers and other religious activities. From his sprawling Ojusagbola Mansion to Mayegun’s Resort in Ijebu Ode, Ogun State it shows his penchant for elegance and class.
As a father, K1 de Ultimate does not spare the rod and spoil the child. He encourages his children to embrace education and unsurprisingly, he has a good number of graduates in Law, Medicine and other disciplines to his credit. As we wait for his next album, Timeless with bated breath, I’m confident that he will prove his mastery and perfection of the art, once again.
Truly, he owns modern Fuji after the demise of his greatest influence in music and boss, Alhaji Sikiru Ayinde Barrister.

It is gratifying that he has chosen Wednesday, 16th of March, 2022 to celebrate his indelible legacy. Full of praise and gratitude to God for keeping his aged mother, Alhaja Alimot Sadia to clock 103. As a mother, she accompanied him to the late Olubadan of Ibadan, Oba Saliu Adetunji, then the Chief Executive Officer of Omo Aje Records to sign his record deal with all the stringent conditions she met for the love of his son.
At 65, he has not only created a profile of one of the most creative and ingenious music star in this clime but one of the greatest that comes around.
K1 de Ultimate, your music is healing, fun, play on.