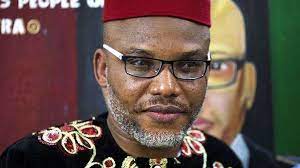 Members of the Indigenous People of Biafra (IPOB) and Biafra agitators have concluded plans to embark on peaceful protest to demand the freedom of pro-Biafra secessionist leader, in two South African cities of Pretoria and Johannesburg.

The protest which titled, “Gauteng Mega Protest” is slated to hold on this week Wednesday and Thursday from 8am to 5pm.

These were contained in an e-flier obtained by newsmen on Monday morning.

The poster which bears Kanu’s photo also has inscriptions like “#FreeMaziNnamdiKanu, #SupportBiafraReferendum,” and described him as, “Mazi Nnamdi Kanu, a prisoner of conscience.”

Kanu is billed to appear before Justice Binta Nyako of the Federal High Court in Abuja on Tuesday, Wednesday and Thursday this week.

His judgment of his lawsuit defending his fundamental human rights at the Abia State High Court, in Umuahia, filed by his Special Counsel, Aloy Ejimakor also comes up on Wednesday before Justice Benson Anya.

The separatist has been in the detention of the Department of State Services since June when he was abducted in Kenya and renditioned to Nigeria, an action that contravened both local and international laws, according to his lawyers