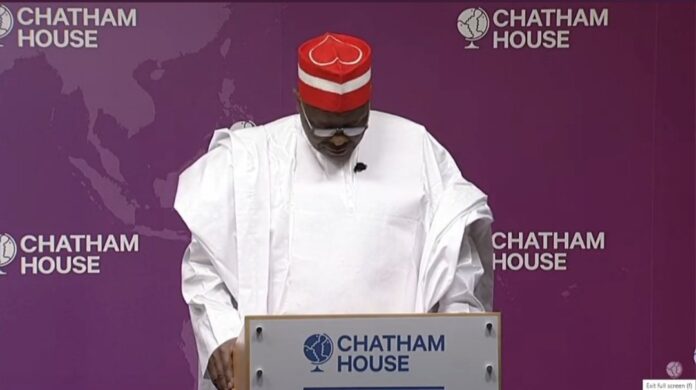 The NNPP flagbearer said this while reeling out his political credentials at the Chatham House on Wednesday.

The Chatham House is the British Royal Institute of International Affairs.

Kwankwaso promised to revamp the economy and create a conducive environment for businesses to thrive and attract more foreign investment if elected.

Kwankwaso in his address at the Chatham House vowed to deal with poverty and poor education in the north if elected.

He said,” I built over 500 classrooms while I was governor of Kano state, and when elected I will bring more people on board to tackle education needs in Nigeria.”

On insecurity, Kwankwaso recalled his time as Defense minister and Special adviser to the president of Somalia and promised to recruit more into the Nigeria armed forces.

Kwankwaso is contesting to be president with the likes of Bola Tinubu, whose party is the ruling party in Nigeria and enjoys wide support from the western part of Nigeria.

Peter Obi, also a major contender, whose profile has recently shot up as he continues to enjoy massive support from the Nigerian youths.

Atiku Abubakar, a former Vice President, is the flagbearer and he is expected to give Kwankwaso a run for his money in the northern region of Nigeria where most votes are expected to be cast in the coming general election.