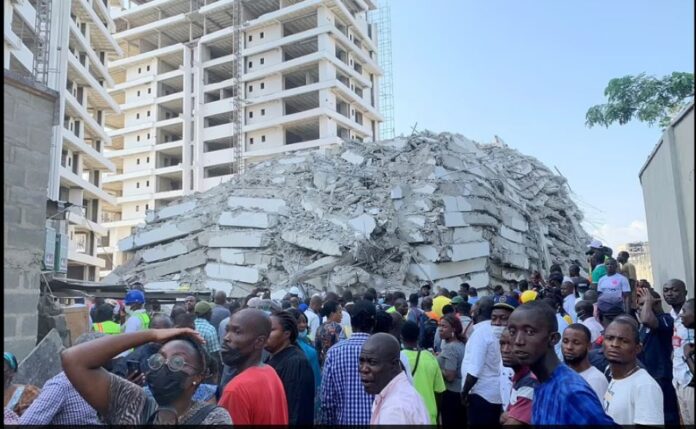 A body believed to be the owner of the building, Femi Osibona has been recovered on Thursday.

An official of the National Emergency Management Agency (NEMA), who confirmed the development to at the site, said rescue workers recovered Osibona’s body on Thursday evening.

As gathered, the lifeless body of Osibona, was recovered after painstaking efforts from emergency responders.

On Thursday night, there were several security operatives on ground as the ministry of health conveyed his body away from the site.

The building, one of a group of three under construction, collapsed on Monday afternoon.

There is still no official figure of how many people were in the building when the structure caved in.

Meanwhile, as of Thursday afternoon, NEMA had recovered 38 bodies.

Also believed to be trapped under the debris are Wale Bob-Oseni, a US-bound real estate dealer and executive director of African Bureau for Legislative Empowerment; Onyinye Enekwe, personal assistant to Osibona who got employed last week; Zainab Sanni, a 25-year-old female National Youth Service Corps (NYSC) member; and Emmanuel Abel, a 16-year-old boy who had travelled from Abuja to work at the site.