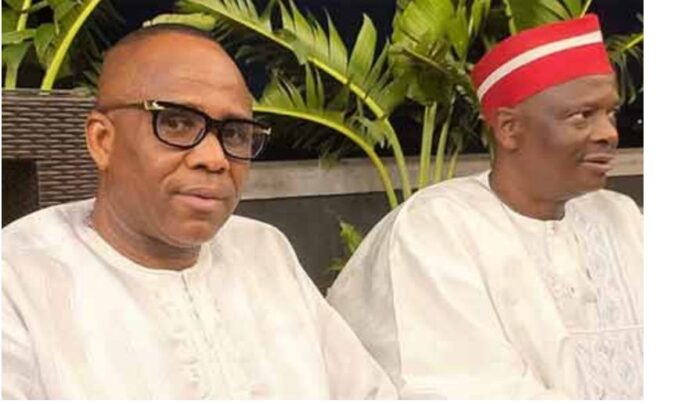 The presidential candidate of the New Nigeria Peoples Party and former governor of Kano State, Rabiu Musa Kwankwaso, on Monday presented Edo State-born Bishop Isaac Idahosa as his running mate for the 2023 elections.

Speaking at the unveiling, which took place at the International Conference Centre in Abuja, Kwankwaso noted that he and his running mate will “heal the wounds inflicted on the country.”

Idahosa is the Presiding Bishop and Senior Pastor of the God First Ministry, Lekki Light Centre in Ajah, Lagos.

The 57-year-old archbishop-designate is a trained Automobile Engineer from Kaduna Polytechnic and has Master’s and Doctorate degrees in Theology.

During the event, Kwankwaso said Nigeria “is currently bleeding,” adding that the country needs people who can rescue it from total collapse.

He said the lack of understanding of how to govern a multi-cultural, multi-religious, and multi-ethnic country like Nigeria by the regime of the President, Major General Muhammadu Buhari (retd.), has inflicted a severe wound on the country.

Kwankwaso said the choice of Idahosa as the vice presidential candidate of the NNPP was made after careful considerations and meticulous screening of more than 20 prospective candidates, all of whom he said were eminently qualified to run with him.

He described Idahosa as someone with an outstanding record, impeccable integrity, broad understanding of the Nigerian state and its contemporary challenges.

Kwankwaso said, “Ineptitude and lack of empathy have dealt a damaging blow on Nigerians as even arrogance and sense of entitlement has further widened the fault lines in our country, and their attitudes toward the core functions of the government are causing a dangerous escalation of insecurity, uncontrollable inflation, scandalous unemployment statistics among the collapse of the tertiary education system and the general collapse of social services.

“We live in a country where victims of insecurity are constantly being ignored while still being accused of exaggeration, lying, or both.

“We live in a country where victims of unemployment are accused of laziness, where Universities and other tertiary education Institutions are frequently being shut down for months, and our children’s future being jeopardized while leaders are busy throwing out hundreds of millions of Naira to purchase party forms.