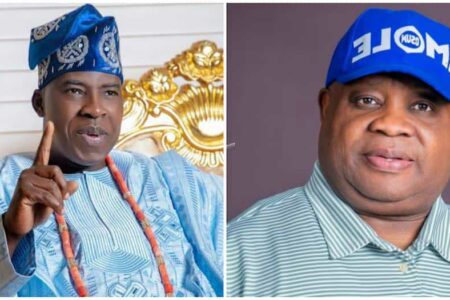 A former governorship aspirant in Osun State, Dotun Babayemi has said he had no regrets challenging the nomination of Ademola Adeleke as the candidate of the Peoples Democratic Party for the July 16 gubernatorial poll in the state, notwithstanding that he lost the litigation.

The Supreme Court had on Thursday, dismissed the appeal of Babayemi.

Reacting in a statement he issued, Babayemi said the exploration of the legal process was good for the country’s democracy, adding,”for us, the legal journey was a long walk and worthwhile with no iota of regret. The kernel of our case at the Supreme Court was not reviewed as it was decided on technical grounds. Above all, no regrets.”

He congratulated the governor-elect, the PDP and the people of the state on the decision of the apex court on the pre-election case.

“I want to wish the Governor-elect, Senator Ademola Adeleke, the PDP and the good people of Osun the very best as a new administration under the PDP prepares to berth in Osun. I pray it will bring about the long awaited turn around to the state and its people,” he prayed

According to him, Osun is a common heritage of all concerned which should be cherished, stressing, “the efforts at taking Osun to the next level should be a task for all.”

“From the depth of my heart, I want to thank everyone for their wonderful support in various forms. I’m indeed very grateful. I want to plead that we ensure that nothing breaks our resolve at making sure that Osun never lags behind developmentally,” he advised

The leadership of the party had expelled Babayemi from the party over alleged anti-party activities and also threatened to sanction any member seen associating with him.

Meanwhile, the statement was silent on the expulsion as efforts to get the reaction of the politician proved arborive. However, it could be recalled that Babayemi had obtained a court order reversing the expulsion, even as the party leadership reiterated his expulsion.