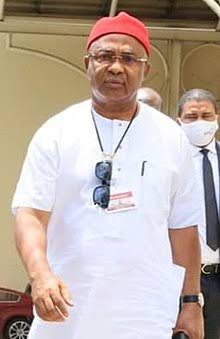 The Imo Governor, Hope Uzodinma has presented more vehicles and gadgets to the special security outfit named ‘Operation Search and Flush’ in the state.

The governor also ordered that all smoking joints where marijuana and other dangerous drugs are sold and used, be searched and flushed out.

The southeast state has been battling violent separatist agitators and criminals, who torched a couple of police facilities and property in the state in recent times.

“Today’s event heralds the presentation of more vehicles and security gadgets to our Operation Search and Flush team. It is a bold statement on our iron-clad resolve to flush out criminals from our dear state.

“It is a signal to bandits, hoodlums and trigger-happy criminals that their time is up in Imo State,” the governor warned on Wednesday, May 5, 2021.

He added that the event further “underscores the fact that our government can never be intimidated by criminals and their sponsors. It also reaffirms our commitment to the protection of lives and property of all citizens of the state including those on transit.

“You will recall that just a few days after I assumed office as the Governor of Imo State, I inaugurated the security outfit known as Operation Search and Flush,(OSF), which brought together all the different security agencies to work as a team to fight every form of criminality.

“The objective then and now is to rout and root out every aspect of crime in our state. I empowered the outfit then with a record of 100 patrol vehicles and sophisticated communication equipment to help them achieve the objective.

“There is no doubt that that intervention yielded positive results, the recent pockets of crime here and there notwithstanding.”

Uzodinma also commended the heads of security agencies in the state for their supportive roles in keeping Imo and her citizenry safe.

“No matter what might have happened recently, the gallantry and sacrifices of these patriotic officers have never been in doubt.

“May I use this opportunity to commiserate with families of the officers who paid the supreme price in the course of executing their lawful duties. My administration will always do the needful to cushion the pains of these losses,” the governor added.

Uzodinma also noted that in the coming weeks, the Imo State Vigilante outfit known as Ebubeagu will be integrated with Operation Search and Flush, to fight crime in the state.

“Let me therefore use the auspicious occasion of this memorable event to declare a total war against crime, criminality and their sponsors in the state. In this regard, I am today declaring a zero-tolerance for crime in Imo State.

“From now onwards Imo State shall be a no-go area for criminals. We shall take the war to the doorway of all criminals; their kindred, their hamlets and their hideout. We shall smoke them out and flush them out of Imo State.

“Consequently, I hereby charge our security agencies to chase the criminals to their hideouts. All smoking joints where marijuana and other dangerous drugs are sold and used should be searched and flushed out.

“Henceforth, any landlord who avails his property to criminals, even smokers of weeds would be answerable to the law.

“In like manner, any traditional ruler in whose domain criminals abide and who fails to report same to relevant authorities will be held accountable,” Governor Uzodinma declared