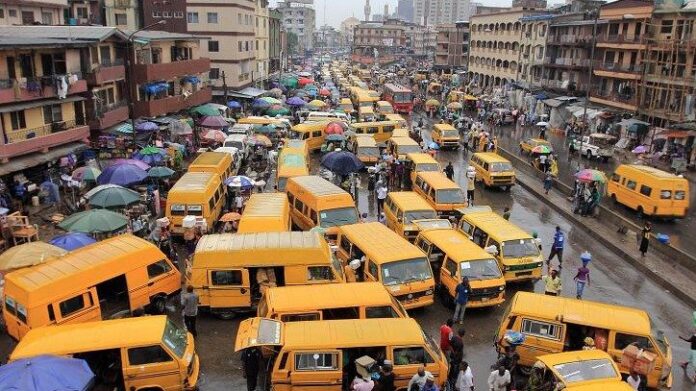 We are at the mercy of touts in Lagos, Commercial bus drivers, commuters lament.

Lagos, the acclaimed Centre of Excellence in Nigeria is, ironically, turning into a city of touts and hoodlums. The mega city has fast degenerated into a chaotic mess with weapon-wielding touts and hoodlums holding sway.

Their nefarious activities are felt in major areas of the city especially along the ever-busy Mile 2 – Badagry expressway, LASU-Iba – Iyana Ipaja- Abule-Egba road.

It is now a common sight to see touts wielding long sticks and pipes on major roads as well as entrances to major streets, extorting transporters.

Some of them dress up in uniforms with the inscription Up road super, while others simply go on mufti. However, both the ones in uniform and those in mufti, all carry out the same violent activities as they seem to be above the law.

Narrating his ordeal in the hands of these hoodlums, a middle-aged commercial bus driver, Bayo Tajudeen said they pay between N15, 000 and 18,000 daily depending on the number of passengers in their vehicle, to touts who disguise as road workers. “I drive an 18-seater passenger bus. When I load in the garage at Badagry, out of those 18 passengers, they will collect money for four passengers.”

Explaining further, Tajudeen said: “At the park, I pay N3,200 in the morning after loading. On my way, they will start collecting N100 starting from Muwo Bus stop. Before I get to my destination at Mile 2, I would have paid N100 about 25 times on the first trip from Badagry to Mile 2. And from Badagry to Mile 2, whether you like it or not, you have to buy fuel worth N4,000. This is excluding policemen and LASMA officials’ troubles.

“We still have to service and maintain the bus. Where is our gain when we work like elephant and eat like ant with nothing to show for it?” he asked.

Vanguard Metro gathered that many commercial bus drivers avoid stopping at some designated bus stops because of the activities of touts who extort them brazenly. This was buttressed by another bus driver, Sikiru Azeez who lamented that his bus doesn’t have rear mirrors as these touts keep destroying them.

“At a point, I had to stop replacing the broken ones. Take a look at the body of my vehicle; they keep hitting it with sticks.

Another commercial driver who pleaded anonymity said that the upsurge in the activities of the hoodlums in Lagos was a result of Alhaji Musiliu Akinsanya, MC Oluomo’s suspension by the national leadership of the National Union of Road Transport Workers, NURTW as Lagos State Council chairman of the union.

According to him, he was later appointed as the chairman of the Lagos Parks Management Committee after he pulled out of the Lagos branch of the union but that did not stop their nefarious activities in major parts of the state.

Botched relief from government
The chairman of Mega-city drivers, Abidun Akintade noted that when the incumbent Commissioner for Transportation announced that Lagos State Government has introduced a daily ticket of N800 per day for commercial vehicles; they were all excited, thinking an end had come to all the illegal extortions on Lagos roads by touts.

“We expected that a single daily ticket of N800 will bring succour and great relief to commercial drivers, particularly in the aspect of extortion by some members of NURTW and RTEAN. Unfortunately, our relief was been short-lived as the extortion continued unabated.”

Demand for single daily N800
Akintade added that even after the inauguration of the Lagos State Park and Garage Management Committee, drivers of commercial vehicles in Lagos believed this effort was designed to put an end to the extortion by some unscrupulous members of NURTW and RTEAN on Lagos roads and federal highways but, the extortion continued.

Calling on the state government to put an end to the menace, Akintade said the government should enforce the single daily ticket of N800 policy according to the law of the land. “The government,” he continued, “should as a matter of urgency, clear all touts from our roads and highways. We agree to N800 daily as our tax. Anybody that is paying N24, 000 as monthly tax is doing well.

Commuters groan also
Meanwhile, commuters are also complaining about the touts as their activities affect their pockets drastically. They noted that their expenses on transportation have increased tremendously as a result of the increasing amount of money paid daily by the drivers. According to one of them, there is also the danger associated with being a passenger inside any of those commercial buses.

“Our lives are always at risk whenever their encounter with touts degenerates into confrontation. It is either the commercial bus driver angrily drives off and gets involved in an accident or the touts pounce on passengers and force them out of the vehicle. Woe betide you if it happens in a dangerous area prone to attacks by other hoodlums. They will make mincemeat of you at the end of the ugly encounter.” (Thenewsstar)