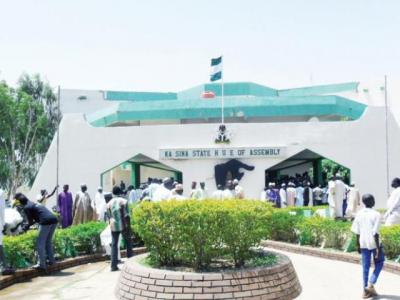 Some offices in the Katsina State House of Assembly complex went up in flames on Sunday night.

The affected offices included that of the clerk of the House and the legislative common room.

He revealed that the fire started around 6.30pm on Sunday, adding that the timely intervention of men of the state fire service prevented it from spreading beyond the affected offices.

Magarin said a committee would be constituted on Wednesday to investigate circumstances surrounding the incident and other details.

A source said, “The fire started around 6.30pm on Sunday apparently due to high power voltage in one of the affected offices. The firemen called to put it off were here for almost four hours before the fire was eventually put off late at night. Items destroyed were electrical appliances, furniture and documents.”

Assembly officials restricted movements to the affected offices on Tuesday while they also rebuffed attempts to take pictures and record video.

“We have been directed not to allow any pictures or videos of the affected offices taken,” one of the officials said.

The House, which is on recess, is expected to resume for plenary in February.

It will be recalled that parts of the Assembly complex went up in flames in April 2021.