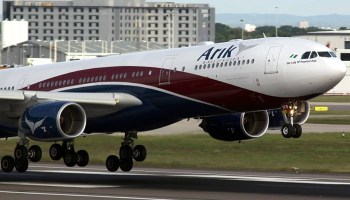 The Federal Government has invested over N100bn in the Nigerian civil aviation sector in the last five years, the Minister of Aviation, Hadi Sirika, has said.

He said the investments were part of efforts to boost service delivery by workers in the sector, while speaking at the 8th edition of the Aviation Workers Week organised by the Joint Consultative and Negotiating Council in Abuja.

Sirika, who was represented by the Minister of State for Science and Technology, Mohammed Abdullahi, said, “Central to achieving the goals of government in the sector are the workers in the industry.

“So we salute you for your services and for your continued support in assisting the nation and hope that you will continue to exhibit the commitment required in the sector.

“That is why the government has equally committed to deploy a lot of resources to improve the sector through various interventions.”

He added, “You are quite aware that from 2015 to date, the Federal Government has spent N100bn and above in developing the aviation sector. This is through airport and equipment upgrade, training of staff, among others.”

Explaining why the sum had been spent on the sector, the minister said so many projects were left abandoned in the industry before the current administration took over six years ago.

Sirika said, “When we came on board in 2015, a number of airport projects had been abandoned. Basically, they were stalled because of lack of funds. Some of them were because of disagreement over contractual obligations.

“So, the government evaluated some of these challenges and committed funds towards that.

“It was not only about airport upgrade, it included equipment upgrade, staff training, settling of emoluments and many more.”

On calls for the establishment of a National Council on Civil Aviation, the minister said the Federal Government would look into the matter to see how it could be established.

Sirika said, “One of the speakers mentioned the need for setting up the National Council on Civil Aviation. I think it is a compelling case for the council to be established.

“This is because we have seen how similar councils in other sectors have been able to work with stakeholders to achieve massive results.

“So I support the call for the establishment of the council and I believe that government will look into it and see how it can be established.”

On his part, the Joint Council Chairman, JCNC, Hector Nnadi, said national councils had been the platform for most ministries to examine, explore, initiate, proffer and compare notes on key policy decisions or issues.