Family drama, lies, crime, and so much more on this week’s episode of BET Africa’s Isono 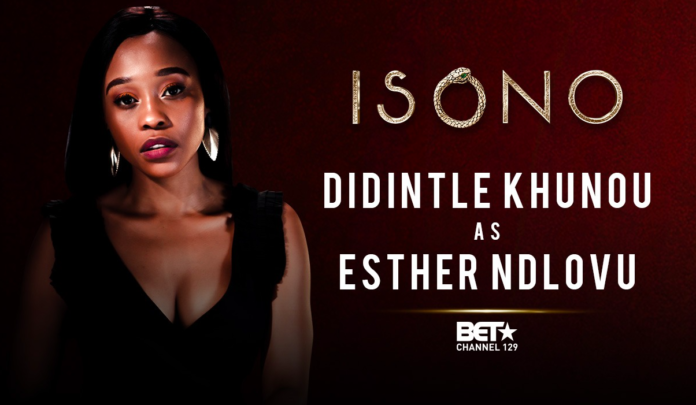 Last week on Isono, which airs on BET Africa (DStv Channel 129, GOtv Channel 21), the drama is at an all-time high and it’s not in Pastor Abiola’s family, a role played by Nigerian actor, Fabian Adeoye.

“Mother Mary” is at it again, following a successful re-launch of Casanova and Esther’s biological father arriving in Vosloorus, Gabriel reveals to Esther who her biological father is and sets the mystery to rest. The conniving Mary sees this as another opportunity to get closer to Esther, so she twists the story yet again in her favour. Now that everyone knows who Kgosi aka Elliot King is, he does not waste any time assuming the role of a father in Esther’s life as he tracks down Rubin in hopes to make him pay for everything he did.

Sarah continues to help Rubin hideaway, only to find out that he plans to expose Mary’s secrets. But, Sarah won’t let that happen as she wants to be the one to bring Mary down so she decides to take matters into her own hands.

After resorting to the life of crime to impress Lesedi, Zakwe can’t seem to keep out of trouble and Maradona has him exactly where he wants him. He feels pressured to keep robbing people’s homes to keep Maradona from hurting the people he cares for. However, Maradona pushes too far when he suggests robbing Noluthando’s tavern. They end up stealing money raised for charity and Zakwe’s conscience starts to kick in.

Phindile is upset after seeing Millicent’s post on her social media and is embarrassed that so many people saw it. She tells Millicent to take it down. Millicent thinks that Phindi is ungrateful and decides to sell one of the donated dresses.  She starts feeling bad after hearing why Phindile wanted that image down and buys a new dress for her. But, all her efforts could have been for nothing after Sphiwe decides to dump Phindi and take Neo to the Matric dance instead.

Phindi is crushed and feels worthless. Umpas finds her hiding in Jumaima’s room and takes the opportunity to tell her about his feelings. They share the first dance and gaze into each other’s eyes. Seems like things worked out for the best.

To catch more on the story of LOVE, PAIN AND BETRAYAL and the best in storytelling, be sure to tune in to BET Africa’s Daily Drama, ISONO, Monday to Thursday on BET Africa (DStv Channel 129, GOtv Channel 21) at 20:30 WAT and repeats at 17:00 WAT where dark secrets lead to deadly sin.

For more information on BET Africa’s original daily drama visit www.betafrica.tv, like and chat to us on Facebook at www.facebook.com/BETinAfrica, or join the conversation on Twitter and Instagram @BET_Africa using the hashtag #ISONOBET #BETAFRICAORIGINAL.