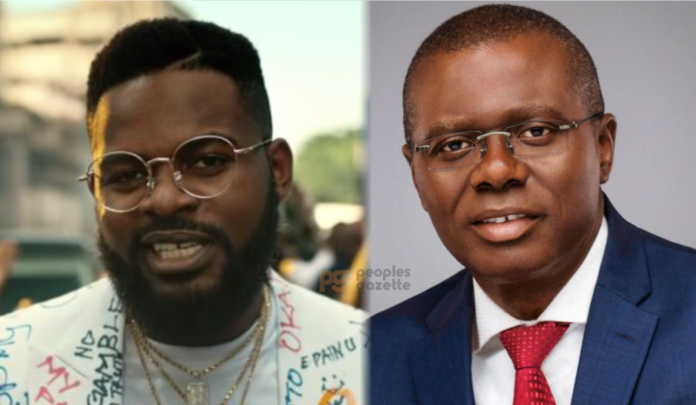 The celebrated musician says the suggestion is a joke and a very disrespectful one.

“This suggestion of a “walk for peace” sounds like a joke and a very disrespectful one at that. People were murdered in cold blood and absolutely no iota of justice has been served more than a year after. How can there be peace without justice? #EndSARS,” Falz wrote in a series of tweets.

Falz was included in Gov. Sanwo-Olu’s list of invitees for his proposed peace walk which he announced in his speech yesterday.

Sanwo-Olu, in his speech yesterday, touched on the reports submitted by a judicial panel set up to investigate cases of police brutality in the state.

The panel also investigated the killing of unarmed anti-police brutality protesters at Lekki Toll Gate on the evening of October 20, 2020.

Sanwo-Olu gave the address ahead of the release of a white paper on the panel’s reports.

Sounding conciliatory, he called for a walk for peace next month “to herald the healing of our land.”

Sanwo-Olu said the state must come “to terms” with the killing of the protesters who were protesting against police brutality and provide “closure”. He, however, did not say if his government would take responsibility for what the panel he set up said was a “massacre”

“I will start by saying that we, as an administration, are determined that the next steps that will be taken in this process of coming to terms with the events of October 2020, must bring closure to a painful episode in the history of our State, with the release of the White Paper later today,” the governor said.

Falz, who was at the forefront of the protests in Lagos, insisted the invitation by the governor was in bad taste.

“People were murdered in cold blood and absolutely no iota of justice has been served more than a year after. How can there be peace without justice,” he asked.

Debo ‘Mr Macaroni’ Adebayo also declined the invitation but noted that he was not “at war” with the government.