Ex-militants promise Buhari that Niger Delta will be at peace. 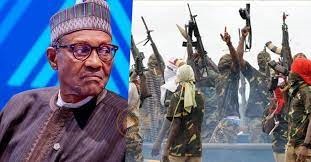 President Muhammadu Buhari has received assurances from former Niger Delta militants about their unwavering support and dedication to his administration’s initiatives and programs for promoting peace.

In order to maintain the current state of peace in the Niger Delta region, the ex-militants also reaffirmed their ongoing collaboration with the security authorities.

The promise was made two days after President Buhari changed his mind about the original schedule for ending the Presidential Amnesty Programme (PAP), by the end of this year.

National leader of the Third Phase of the PAP, Comrade Tonye Bobo aka Sir T, in a press statement issued on Monday, said the President “being a strategic thinker heeded to the cries and advice of ex-agitators, leaders of thought and critical stakeholders not to wind down the amnesty programme, hence his reversal of the earlier decision.”

He described the President Buhari’s decision not to shut down the programme “as a wise decision coming from a true father who is sensitive to the yearnings and aspirations of the people of the Niger Delta region.”

Comrade Bobo, who is also a member of the Presidential Amnesty Strategic Communication Committee, noted that President Buhari’s decision to keep the program running at this time says a lot about him, about the people of the Niger Delta, and about the necessity of rapid socioeconomic development in the area.

In addition to thanking the National Security Advisor (NSA), Maj. Gen. Babagana Monguno (retired), for his understanding and support of the Amnesty Programme, Bobo also expressed his gratitude to the Interim Administrator of PAP, Maj. Gen. Barry Tariye Ndiomu (retired), for taking the bold initiative to consult important stakeholders, particularly the ex-agitators, to seek their opinions before approaching the President to persuade him to reconsider his earlier decision to wind down the programme.

He recalled that Gen. Ndiomu had crucial meetings with ex-agitators’ leaders from phases 1, 2, and 3 as well as other stakeholders in the area to gauge their reactions to the program’s proposed winding down. He pointed out that the Interim Administrator’s proactive efforts had undoubtedly produced fruitful outcomes.

He added that all rumors that Gen. Ndiomu was brought in to carry out a hatchet job for the APC-led government had been put to rest by President Buhari’s decision to keep the Presidential Amnesty Programme in place.

While soliciting support from all stakeholders, he said, “We call on the saboteurs in the region who are bent on tarnishing the image and reputation of Gen. Ndiomu to desist from such acts.

“We equally warn those working against his mandate with plans to divide the Niger Delta people and create isolation in the region to have a rethink,” he further appealed.