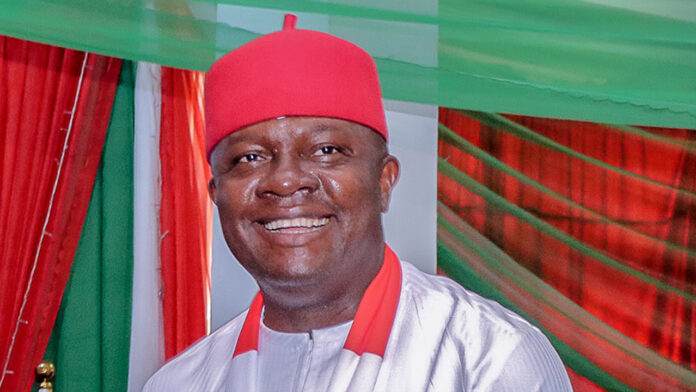 Former governorship candidate of the Peoples Democratic Party (PDP) in the Anambra State governorship election of 2021, Valentine Chineto Ozigbo, has dumped the party and joined Labour Party (LP), and endorsed Mr. Peter Obi, saying the 2023 general election will be a significant one for the life of the country.

Explaining his decision, Ozigbo said, “There comes a defining moment in the life of any country when all people of good conscience must stand up to be counted.

“Those times offer no middle ground; you are either on the dark side or on the side of the light.

“For Nigeria, 2023 is such a moment. Nigerians will be divided into two classes – those who will work to entrench the forces that have destroyed Nigeria or those warriors of the light who will work to bring justice, equity, and peace to our beloved country. And next year, as we go to the polls to elect a new president, there will be no fences to sit on”.

Nothing that Nigera has failed under All Progressives Congress (APC) and President Muhammadu Buhari, Ozigbo said that when Nigerians vote in February 2023, they will have two clear options, either to “sustain the old corrupt brigade, an inept and outmoded class of politicians running on naked ambition and a raw desire for power, or turn away from our past and embrace the new possibilities of a bright future”.

He said that youth takeover of Nigeria is inevitable given their burning desire for change.

According to him, “The youth have risen boldly and intentionally to get their voices heard. They have rejected the lust for power of politicians that ought to be in retirement. They have consciously chosen who they want to lead them into the next four years.

“This magical movement, a youth-driven political revolution, is inspired by the candidacy of Peter Obi, a modern-day leader who we can all believe in”.

Ozigbo noted that Nigeria has never seen this level of passion in the youth who instead of criticism and unfair attacks, these courageous and gifted youth deserve the support and encouragement of all Nigerians.

He said that “The Obi-dient Movement cannot be ignored, shamed, or waved away. It is the fastest growing and biggest political movement in Nigeria today. The forces that have imprisoned the dreams of the younger generations of this country are terrified because they know the unstoppable power of the youth”.

He eulogised Obi saying Obi having been the governor of his home state of Anambra for eight years, the groundswell of support that his candidacy is receiving from Anambra, the South East, and the entire country is based mainly on the revolutionary, inclusive, and inspiring leadership he demonstrated as a governor.

He continued, “Before he was 40 years, Peter Obi had created an enviable mark in the private sector. A multiple-award-winning banker, entrepreneur, and globally trained business leader, Obi took the helm of Anambra State after a long fight for justice. Eight years later, he had completely transformed the leadership culture in Anambra with his style of down-to-earth grassroots engagement, prudential management of resources, and keen vision for qualitative transformation.

“Peter Obi is the Nigerian politician I have the utmost respect for. Having worked with him closely during my governorship campaign in 2021, I can attest that Obi is a thoughtful, kind, and generous leader who seeks excellence in all he does”.

He added that “Pulled by the brilliance of the candidacy of Peter Obi and Yusuf Datti, inspired by the passion of the Nigerian youth, and driven by an undying love for Nigeria, I, Valentine Ozigbo, at this moment, formally join the Obi-dient Movement”.

He said that from what he knew about Obi, if they join their hearts and hands and elect him as the next president, he Ozigbo candidate guarantee that Obi will be the best president Nigeria has ever had.

He called on all Nigerians to join hands and work to transform the promise and dreams of Nigeria into reality.