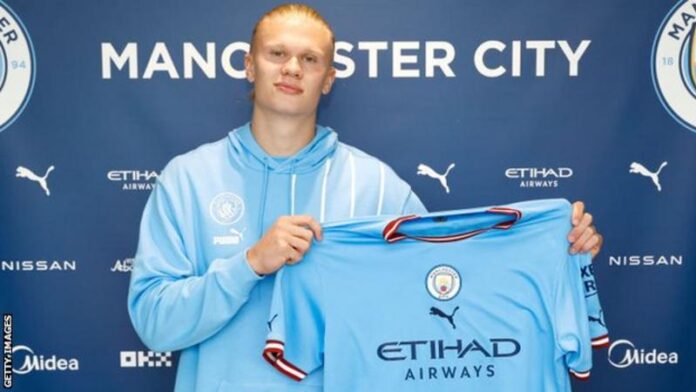 Erling Haaland says he is “in the right place to fulfil his ambitions” after completing a £51.2m transfer to Manchester City from Borussia Dortmund.

The 21-year-old scored 86 goals in 89 games for Dortmund and arrives at the Premier League champions as one of world football’s most coveted forwards.

He has signed a five-year deal until 2027 and will join the club on 1 July.

An agreement was reached for the Norway international in May after City activated the player’s release clause.

“This is a proud day for me and my family,” said Haaland, the son of former City captain Alf-Inge, who played for the club between 2000 and 2003.

“I have always watched City and have loved doing so in recent seasons. You can’t help but admire their style of play – it’s exciting and they create a lot of chances, which is perfect for a player like me,” he added.

“There are so many world-class players in this squad and Pep [Guardiola] is one of the greatest managers of all-time, so I believe I am in the right place to fulfil my ambitions.

“I want to score goals, win trophies, and improve as a footballer and I am confident I can do that here. This is a great move for me, and I can’t wait to get started in pre-season.”

City director of football Txiki Begiristain said: “Haaland is a huge talent and has been one of the best strikers in Europe over the last few seasons.

“His goalscoring record is exceptional and his performances at Borussia Dortmund and in the Champions League in particular have proved he can succeed at the highest level.

“Erling has everything we want in a striker, and we are certain he will excel in this squad and this system.”

The deal ends the club’s hunt for a successor to club-record goalscorer Sergio Aguero, who joined Barcelona on a free transfer in June 2021.

Erling Haaland’s outrageous rise and what happens next

Haaland has scored 92 league goals in 121 appearances in total in spells at Molde, Red Bull Salzburg and Dortmund.

On Sunday, Haaland scored his 20th international goal in 21 games for Norway, leaving him 14 away from becoming the top men’s scorer in the nation’s history.