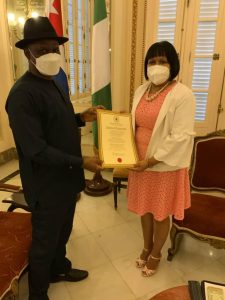 Nigeria’s Ambassador to Cuba, Amb. Benaoyagha Okoyen has pledged to explore new and innovative ways of leveraging on existing bilateral relations between Nigeria and Cuba.

A statement made available to the News Agency of Nigeria (NAN) in New York on Wednesday said Okoyen made the pledge in Havana at the presentation of Copies of D’Usage to the Cuban Deputy Foreign Minister, Mrs Anayansi Camejo.

The presentation of copies d’usage marked the formal commencement of his accreditation process in line with prevailing protocols in Cuba.

The Nigerian envoy pointed out that Nigeria-Cuba relations were “underpinned by historical, cultural and blood ties.

“The historical, cultural and blood ties are major tripods that sustain and deepen engagements between the two countries, both at bilateral and multilateral levels,’’ Okoyen said.

The envoy added that newer and untapped areas of economic and commercial opportunities available for both countries would be given priority in the course of his tour of duty in Cuba.

He thanked Cuba for its support to Nigeria in particular, and Africa in general in the areas of liberation, health care, and humanitarian assistance.

Okoyen also conveyed the goodwill message of the Minister of Foreign Affairs, Geoffrey Onyeama to his Cuban counterpart.

He expressed gratitude to the Deputy Foreign Minister for the excellent reception accorded him and members of his family on arrival in Havana.

In her remarks, Camejo expressed delight at the arrival of Okoyen in Cuba and expressed the hope that his arrival in the country would mark a rejuvenation of bilateral relations between the two countries.

The envoy affirmed that Cuba’s relations with Nigeria was crucial, given the deep cultural and fraternal ties that connected the two countries.

She thanked Nigeria for its consistent support to Cuba, especially toward  eliminating the strangulating U.S. economic blockade of Cuba.

She also emphasised that Nigeria’s unequivocal support had always been part of what Cuba could count on at the International fora.

She assured that Cuba would remain committed to supporting Nigeria even regardless of the changing global dynamics.

Okoyen, who is concurrently accredited to The Bahamas, Honduras, and Nicaragua, was the immediate past Consul General of Nigeria in New York and is expected to present his Letter of Credence to the Cuban President at a later date.